"Marriage: It's Only Going to Get Worse."

When I read that headline this week, I wasn't sure if it was a news story or an ad for a divorce lawyer.

Turns out this little ray of sunshine was for an article at LiveScience.com, a science news Web site, about a new study that says spouses get more irritated with each other as they grow older. In other words, what starts out as a small pebble in your shoe will be a huge emotional boulder by your 50th anniversary.

"The study results could be a consequence of accumulated contact with a spouse such that the nitpicking or frequent demands that once triggered just a mild chafe develops into a major pain," the article said, pointing a bony finger at nitpicking and demanding spouses everywhere. You know who you are.

"Do you, Mark, promise to nitpick and frequently demand, 'til death do you part?"

Articles like this make me worry about the writer. In this case, Jeanna Bryner penned this story of marital despondency and angst.

When the opening line is "If your spouse already bugs you now, the future is bleak," you have to wonder if there's some underlying tension at home.

So what made her want to do this article? Does she have an axe to grind? Does she secretly loathe her husband because he nitpicks and demands things? Did she stick a copy of this article on the refrigerator with a kitchen knife, and the words "Back off, jerkwad!" scribbled in blood red lipstick?

Actually, I'm sure she's a very nice person, and loves her husband very much. (Hey, you just don't want to get crosswise of someone who jabs her refrigerator with huge knives.)

But there's gold at the end of the bitterness rainbow. Kira Birditt, research fellow at the University of Michigan's Institute for Social Research, says that long-term irritations can actually be good for a relationship.

"As we age and become closer and more comfortable with one another, it could be that we're more able to express ourselves to each other."

Translation: as you get older, it's perfectly all right to tell your wife to quit nagging you about leaving your freakin' socks on the floor.

However, it seems that older couples are more happy in their relationships than the 20- and 30-somethings they surveyed.

According to the researchers -- Birditt, Toni Antonucci, and Lisa Jackey -- couples in their 20s and 30s had the most negative relationships, including relationships with spouses, children, and friends. Probably because they're a bunch of whiners.

Meanwhile, older couples had the least negative relationships, and reported less conflict in their relationships than their young upstart counterparts.

"Older adults are more likely than younger people to report that they try to deal with conflict by avoiding confrontations, rather than by discussing problems," Birditt told LiveScience.com.

Translation: the key to happiness in a relationship is smushing your negative feelings into a tiny black ball of hate and anger, cramming it deep into your soul where no one will ever see it.

I'm also a little confused. On the one hand, older people can more easily express themselves to each other, which makes for a happier relationship. On the other, older people are less likely to discuss their problems. In fact, they avoid confrontations and just learn to live with the annoying things their spouses do, like pretending to be asleep so I have to take my son to the bathroom in the middle of the night.

Either way, the Three Amigas say it's all a normal part of getting older.

"(I)t's possible that negativity is a normal aspect of close relationships that include a great deal of daily contact," Birditt said.

(I hate it when researchers talk like researchers. What she actually said is "It's normal to want to kill your spouse.")

At the same time, as people get older, the relationships with their children improve, possibly because the kids become adults themselves. This is a good thing, because these are the same kids who will be paying for your nursing home, so be sure to stay on their good side.

The bottom line? While your marriage crumbles around you as you enter your golden years, don't despair. It's not you. It was never your fault. You now have solid scientific research that your spouse is a Grade A jerk, and you were right all along.

And you should feel more comfortable to express yourself about it. 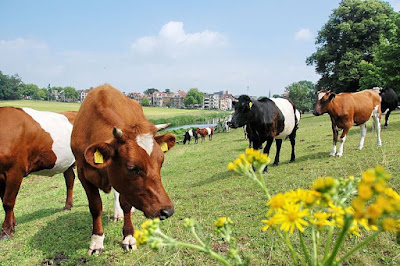 Who knew that eating hamburgers could be so good for the environment? On the heels of its Impossible Whopper — a burger made completely of plant-based protein and regret — Burger King is once again leading the way to make the world a better place by offering low-fart hamburgers. Not low-fat hamburgers, low-fart hamburgers. According to climate scientists, the livestock industry has been directly responsible for almost a quarter of the climate change since we started mass-producing food. In the U.S. alone, nearly 9% of greenhouse gases come from all agricultural production, and 3.3% specifically comes from cows. More specifically, cow farts and burps. In order to help reduce the amount of methane produced by U.S. cows, Burger King has developed a low-fart hamburger. Meanwhile, McDonald's fans learned to make a "black cow float" with their soft-serve ice cream and a Coke. Technically, the new sandwich is called a Reduced Methane Emissions Beef Whopper, but t