The Curse of Bananas on Fishing Boats

on July 31, 2020
Are you superstitious? Do you throw salt over your shoulder when you spill it? Do you go out of your way to avoid walking under ladders? Do you refuse to say "Macbeth" in a theater?

Legend says that if anyone is so pinheaded as to say the name of "The Scottish Play" (as it's called in the acting community) inside a theater when the play is not being held, the offending blasphemer is supposed to immediately spin around three times on the spot, spit over their shoulder, and then say an obscenity of their choice. (Just make it a good one; hundreds of years of theatrical heritage are riding on you fixing this screwup.)

Another legend says the Macbonehead is supposed to leave the theater, walk around it three times, and then spit over their left shoulder.

And still, another says they have to leave the theater, knock on the door three times, be re-admitted by the troupe, and then say a line from Hamlet.

Just don't quote Act 5, Scene 2: "I thumb my nose at superstitions. God controls everything — even something as trivial as a sparrow’s death." Theater troupes are not known for the open mocking of their beliefs and weirdness even though there's so much of it.

I've never been entirely superstitious, but I have a few quirks that I indulge in to prevent misfortune befalling me.

For starters, I never change a radio station if a Pink Floyd song is playing. It doesn't matter if I just heard the song five minutes earlier, or I don't like the song, I won't change the station until the song is over.

This doesn't actually prevent any disasters, I just really like Pink Floyd.

I also never write in pencil, only with pens. If I ever have to borrow a writing instrument, I will search and search for a pen even if there are a handful of pencils available to me.

This is a quirk I've spent years cultivating, and I'm still trying to figure out whether it's actually weird. Agatha Christie used to eat apples in her bathtub while examining murder photos, so this pen thing is rather silly. Maybe I need to eat apples too.

Also, Verlander joined the Astros in 2017, the same year they cheated their way to a World Series championship, and is now out for at least two weeks with a forearm strain.

The moral of the story? The Astros are dirty rotten cheaters.

That has nothing to do with superstition. I just want to remind everyone that the Astros should have their World Series championship vacated. 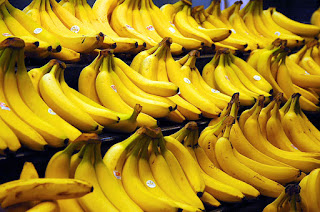 But my new favorite superstition is the curse of bananas on a fishing boat.

Despite being an occasional fisherman, I had never heard of this superstition until I read an article on CentralMaine.com about fishing guides who refuse to allow bananas on their boats.

It's so widespread, and fishing guides feel so strongly about it that they not only have big signs banning the fruit, they'll search your bags and tackle boxes to make sure you don't smuggle any on board.

Need proof? Fishermen are honest and not prone to exaggeration, so let's check out a couple of their stories.

One guide, Scott Bartlett, was taking four anglers out on a lake when one of them caught a monster salmon and had almost gotten it to the boat when the line snapped, and the trophy fish was lost forever. Seconds later, one of the other fishermen pulled out a banana and started eating it. The unfortunate fisherman tore into Banana Bob, yelling and calling him all sorts of F-words until Bob threw the rest of the banana overboard.

Worried that merely throwing away the banana wasn't enough, the rest of the group made Banana Bob chug two beers and throw up the offending fruit to get all traces of it off the boat.

It clearly worked, because five minutes later, two guys snagged fish, and they ended up catching double-digit numbers that day.

Another fishing guide, Mike Faulkingham, had a similar story. He was taking a bachelor party out for a shark fishing expedition and they had caught nothing for four hours. Mike noticed one schlub up in the bow eating a banana and hollered at him for thumbing his nose at the banana curse. The rest of the party piled on until Dances With Woes threw away the offending banana.

This was enough to lift the curse because Mike said it was less than 40 seconds later that the group hooked a blue shark and managed to land it.

So if there's a lesson to be learned here, it's this: Eve may have tempted Adam with an apple, but a banana won't help you catch any fish.