Karl the Curmudgeon Relies on This Old Memory Trick

Hey, Karl, why do you have a piece of string tied around your finger? I asked my friend. We were sitting in a booth having lunch at our favorite burger restaurant, Granfalloon's, when I spotted the finger flower.

"Because I use this one for driving," he said, flashing me the finger next to it.

You still haven't answered my question: Why the string, Bing? Why the knot, Scott? Why the bow, Beau?

"Stop it," growled Karl. "I need it to help me remember something." He stole some French fries off my plate and ate them.

"You can have some of my broccoli."

That string is cutting off the blood to your brain. You forgot how much I hate broccoli. And you forgot to answer my question.

"I did forget. I was hoping our clever little repartee would jog my memory somehow."

You didn't write it down?

So you wouldn't have to tie a piece of string around your finger!

"Kid, I've done this trick since before you were born. Whenever I have to remember something, I tie some string on my finger so that every time I look at it, it reminds me." 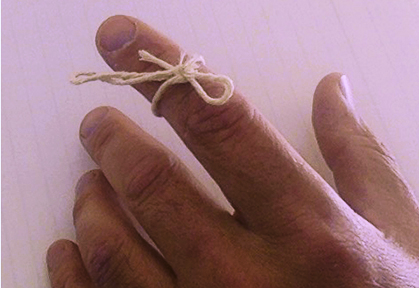 It's not working this time. Are you sure it's not broken?

"No, I just wasn't paying attention when I tied it on because She-Who-Must-Be-Obeyed was lecturing me."

"She" was Alexis, Karl's younger daughter, the organic vegan anti-chemical activist turned executive-in-training, now starting her second year of her MBA. She lived with Karl and was constantly lecturing him on all the things he was doing wrong (everything) and congratulating him for the things he did right (nothing).

So why didn't you write it down in one of your little notebooks? I asked, stealing a piece of Karl's broccoli. I studied it for a few seconds and put it back.

"Because that's not what my notebooks are for," said Karl, pulling a thin Field Notes notebook out of his shirt pocket. "These are for story ideas and works in progress only. I rely on my steel trap memory and this tried-and-true trick when I have to remember something." He waved his finger at me again.

Wrong finger, I said. Also, your steel trap is rusted shut, Karl, or else you'd remember why you're sporting a twine tassel. You need to use a modern method. Have you tried a to-do app on your mobile phone?

A to-do app. It's an app that works as your to-do list. You put your reminders into it, schedule them for the time and day you want to do them, and then they pop up and remind you on that specific day.

"That sounds like too much trouble. All I need is a four-inch piece of string."

Clearly, you need more than that, I said. At least the app tells me exactly what I'm supposed to remember. It's not a metaphor that's supposed to jog my memory. You should give it a try.

I pulled up the appropriate app on my phone and showed it to him. I use one called Todoist, I said. I put in all the things I need to remember to do, schedule them for the right day, and when I finish one, I tap the little circle, and it gets marked as completed. See, here's our lunch appointment; I just tap that little circle, and voila, it's completed.

"So spending time with me is a task?" said Karl.

More like a Herculean labor, I said, but you're buying so I'll put up with you.

"Says you. I bought the last two times."

I don't remember that at all. How do you even know? I demanded.

Karl dug into his wallet and pulled out a piece of string. "That's how," he said. "See, my string thing works."

Jeez, man, do you use the string method for everything?

"Of course. I also have a string tied around my—"

Bup bup bup! I interrupted. I don't even want to know.

Oh. I thought about that for a moment. Finally, I couldn't contain myself any longer. Why would you do that? I asked.

"That one is to remind me to do my laundry," said Karl.

You're not going to remember that until you actually take your socks off, which means you won't do your laundry for another week.

Karl made a face and then flagged down our server. "He'll take the bill," Karl said.

Stupid reminder string, I grumbled. It's clearly faulty. It could be anything. Maybe it was a reminder that you were supposed to buy lunch because my birthday was last week.

"That's bull," said Karl. "I know your birthday is in June."

Damn, I thought I had you, I said. Clearly whatever it is must not be that important or you'd have remembered.

Karl stared at the string on his finger, rubbing it absent-mindedly.

My new humor novel, Mackinac Island Nation, is finished and available on Amazon. You can get the Kindle version here or the paperback version here.
Karl memory notebooks
Location: Orlando, FL, USA