The Pandemic, Jerry Falwell, and Baseball

"As we go through the pandemic, be sure to keep a journal so people who study this period in a couple hundred years will know how we lived."

Someone recommended that on Facebook a few months ago when the pandemic first hit. And it seemed like a good idea.

Except the idea was on Facebook, which is a dragon's hoard of "how we live" gold. Who needs written journals and diaries, when you can read every grumble, gripe, and grievance about this pandemic.

Maybe we needed that kind of source material 200 years ago, but Facebook has eliminated the need for secret diaries to record the events of our lives.

"Nothing important happened today," King George III wrote in his diary on July 4, 1776.

Oh, sure, there are some of us who hide our innermost thoughts — "I really don't like my wife's red-skinned potatoes" — but most are eager to share them with 2,000 of their closest and dumbest friends.

"This biological virus is a hoax that is also transmitted by 5G cell phone towers. Wake up, sheeple!"

So, no, researchers won't be relying on journals and diaries in 200 years, because there are literal petabytes of information about how we lived through this pandemic.

(A petabyte equals 1 million gigabytes. The "Avengers: Endgame" movie is 2.7 GB in size.)

And this doesn't include the thousands of pandemic-related news stories every week, which crowd out most other news stories. I'm not sure if nothing else is happening, or if the media can't cover it because there's no room.

The current news landscape has been a problem for humorists because there are only so many times you can write about the coronavirus, and even fewer ways to write about people who refuse to wear a mask and then are astonished when they catch the virus and die.

So we're buried under all this doom-porn of story after story about the coronavirus, protests against police brutality, and whatever nonsense is happening in Washington. 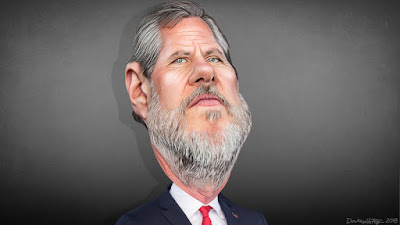 The only real break came from the breathless news about Jerry Falwell, Jr. He resigned as the president of Liberty University after it was revealed his wife Becki had a multi-year affair with pool-boy-turned-business-partner, Giancarlo Granda.

Falwell was originally suspended after posting an Instagram photo of himself standing with his arm around his wife's assistant, both with their pants unbuttoned and bellies exposed.

That suspension became permanent when Granda shared details and photographic proof of his affair with the media, and said he and Becki met several times a year while Falwell sat in the corner and looked on. The pool-boy-boy-toy scandal was the final straw, and Liberty's Board of Directors knocked each other over in a scramble to accept his resignation.

Or as one Twitter comic put it, Falwell resigned so he can spend more time watching his family.

The coronavirus even had an impact on sports news, as the virus interrupted every sport. Many of us had to watch marble racing on YouTube or try to pretend last year's baseball games were still new.

I'm still in doom-and-gloom sports mode because my Cincinnati Reds couldn't win a game if the other team left after the fifth inning.

I blame the Reds' so-called closer Raisel Iglesias, who personally lost 12 games last year. The Reds missed the playoffs by 16 games, which means he's responsible for losing three-fourths of them. He undoubtedly played a part in those other four.

Iglesias couldn't close a door if you gave him three tries. Yet manager David Bell keeps putting him in but is surprised when the team loses.

(Okay, maybe he's not surprised. No one is surprised when Iglesias loses another game. That guy could lose his keys in his pocket. But Bell keeps expecting Iglesias to not give up game-winning hits every time he's handed the ball, and it's not working out for him.)

But despite all the COVID news, political news, police protests, and lackluster sports teams, the occasional news story will slip through. And it will be sweet and pure and make you think everything's not so bad.

Like the story of Sankavi Rathan, an 11-year-old Canadian girl, who set the world record for solving Rubik's cubes one-handed while hula hooping.

Sankavi, who has limited mobility in one of her hands, hula hooped for an entire hour while she solved 30 with her other hand. The previous record was 25 cubes solved.

Meanwhile, I have to hop on one foot to keep my balance when I put on my underwear.

I won't blame the media for what they create, because we're the ones demanding it. Instead, I'll urge you to pay attention to more stories about little girls who can perform amazing feats of dexterity and intelligence under intense pressure.

I wonder if she can throw a curveball.