Okay, maybe I overstated that.

The idea of one person, one vote is all fine and good when it comes to choosing our leaders, but it's a terrible way to decide what goes on a pizza.

When people get together to make an important decision like this, no one can agree on anything, everyone is selfish about what they want, and they don't give a flying fig about anyone else.

I'm talking about pizza, not democracy.

Then, no matter what the majority decides, everyone else is upset and angry, and thinks the majority are a bunch of slack-jawed mouth-breathers.

And there's always some lunatic who wants some other third choice that's so weird and unappealing that if they get what they want, everything you know and love will be forever destroyed.

Getting a group of people to agree on anything is nearly impossible. Anyone who has ever served on a committee knows what I mean. But there is nothing more soul-crushing, more agonizing, or more stab-inducing than trying to get that group to decide what to get on pizza. 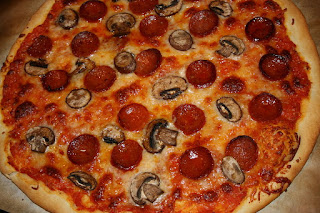 And this is why democracy has ruined pizza. Thanks to democracy, people somehow got the crazy notion that everyone's opinion is equally valid and important. But if you've ever met someone who likes pineapple on pizza, you realize that those people are a danger to themselves and others.

Some people may be upset by that and say they like pineapple on pizza and their tastes are perfectly valid, but there are people who believe the Earth is flat too, so. . .

The only pizza you should put pineapple on is hamburger and mushroom, because that's so bland I won't eat it anyway.

Trying to order pizza for a group is an exercise in bang-your-head-on-the-wall futility. As in, if we don't reach a decision soon, I will bang your head on the wall.

You've been in that situation before, where it takes 20 minutes just to reach a decision:

ME: Okay, I think we finally got this. So we want a pepperoni, sausage and mushrooms, with green peppers on one half, right?

FRIEND A: I'm a vegetarian, but I don't like mushrooms.

FRIEND B: I'm sorry, I wasn't listening. Can we make sure we don't get any pork?

ME: What are you, 8? How about we just get you some chicken fingers and a toy? There's no such thing as cheese pizza, it's just unfinished pizza.

FRIEND C: Fine, get pineapple on it.

ME: We're not friends anymore.

Anyone who has ever tried to get people to democratically reach a pizza consensus has probably wondered if there aren't better models of government to choose from. There are.

There's the Parliamentary model, where the group selects one person, based on their views, to be a sort of prime minister of pizza. That person will choose the pizza that will make the greatest number of people happy. Sure, some people will be unhappy, but maybe next time the pineapple lovers should get more pineapple lovers involved in the decision-making process.

In a Monarchy, the king or queen of pizza is chosen by birthright and they make the decision for everyone. Pizza choosing privileges are later passed down to the monarch's oldest child. No matter what toppings the king or queen chooses, the rest of the group must feign adoration or be banished from the kingdom forever. (Later, the king or queen is overthrown and locked away in a Pizza Hut for several years.)

There's Capitalism, where everyone pulls themselves up by their pizza bootstraps and gets whatever they want. People who like the same things can combine their resources to get a bigger pizza, crowding everyone else's pizzas off the table.

You could always let everyone get whatever they want on the same pizza, but that's Anarchy and that's how you end up with gluten-free dairy-free pizza that had a box of Cap'n Crunch dumped on it.

Or you could try Communism where everyone compromises for the good of the group, and you get toppings that no one hates. Then you'll end up with a bland, uninspired pizza that no one actually enjoys, but there's still not enough of.

In the end, there is only one absolutely correct pizza: pepperoni, sausage, and extra cheese. Science has shown this combination to be the best pizza in the world, and everything else is a pale imitation.

No, I won't show you the research. You'll have to trust me.

Top scientists, that's who. Top pizza scientists at the National Pizza Institute or wherever.

No, you can't have their address. They told me they didn't want to talk to you.

Yes, it was an exhaustive study. I was still full the next morning.

This is what we have decreed, and we will hear no more about it.

The Pizza King has spoken.

My new humor novel, Mackinac Island Nation, is finished and available on Amazon. You can get the Kindle version here or the paperback version here.
democracy pizza
Location: Orlando, FL, USA