You Can Put Mayonnaise On Your Hamburgers

Hey, Inge, can I get some mayo for my burger, please? I asked our server.

"Ew, gross, Kid. Why would you put mayonnaise on a hamburger?" Karl asked, wrinkling his nose. We were sitting at Klompen, our favorite Dutch-themed bar, for a quick lunch. It was a Wednesday afternoon, and we were able to catch a game of Dutch baseball (they call it "honkbal") on satellite: The Amsterdam Pirates were playing the Silicon Storks of The Hague, and my Storks were leading 2 – 1.

Because then it would be moist and delicious, I said.

"But a good burger is already moist and delicious," said Karl.

Then why do you put ketchup on yours?

"And therefore what?" said Karl. 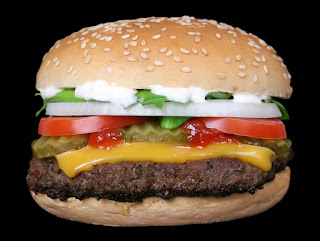 "That doesn't track. Look, these guys serve one of the best burgers in the city and I don't see the need to clutter it up with mayonnaise."

Said the guy who got two kinds of cheese, tomato, onion, bacon and a fried onion ring on his burger.

"Yes, but those are condiments," said Karl. "I'm not poisoning my hamburger with mayo is all."

So can I assume you don't use mayo on your other sandwiches?

"No, you may not," said Karl. "Good sandwiches need mayonnaise."

And a hamburger is a sandwich. It's a piece of meat between two pieces of bread. We can add other ingredients to it, but it's still a sandwich.

"Your usual sandwich nonsense aside, you're already getting enough grease from the meat to soak into the bun, and that makes the bread all slimy and prone to break apart. The mayonnaise only speeds up the process."

That's why you should hold it upside down in the first place. The thicker top bun doesn't break up like that.

Karl took a huge bite of his cheeseburger, signaling his refusal to get pulled in any further. Coward! We'd once argued so loudly about whether a hot dog is a sandwich — it is; I'll fight you — that we were 86ed from the First Editions bar for three months. The only reason we were allowed back was because Karl dedicated his next novel to the bartender, Kurt.

But I was undeterred. As the oldest of three children, and a Philosophy major who loved poking the bear. I knew I was going to have to take a different approach.

I think you just hate mayo on burgers because you heard Bruce Willis say it in "The Whole Nine Yards." You're such a Bruce Willis fanboy.

Oh yeah, then why do you go barefoot and wear a dirty tank top every Christmas?

"I did it one year and that was for my Christmas card."

It doesn't take two weeks to shoot a damn Christmas card, Karl! He said nothing, and instead took a long pull from his beer bottle and glared at me.

Or the time you teamed up with a former football player and wanted to be a private investigator.

"That was my neighbor, and we were trying to figure out who stole our trash cans."

Or that time you tried to sleep with Demi Moore.

"Well, yeah, but in my defense, I didn't even realize who she was. None of that changes anything. You shouldn't put mayonnaise on your hamburgers because it's un-American."

Hamburgers are German, I said. They're actually named after the city of their origin.

So you know what else Western Europeans put mayonnaise on?

Oh yeah. You know what I'm talking about, don't you?

"No, anything but that."

I picked one off my plate and held it up between us.

They put it on French fries, Karl, I said. They dip their fries into special French fry mayonnaise; it's called "frite sauce." I dipped the fry into my little dish of mayonnaise and popped it in my mouth. Delicious, I said. Best. Fries. Ever.

"Why do you have to ruin everything?" asked Karl.

You should try one, I said.

"Are you boys fighting again?" demanded Inge, our Dutch server. "Erik, what are you doing to poor old Karl?" He's an old man, don't torment him like that."

He's afraid of mayonnaise on his burgers and fries, I said. I felt like I was tattling on a classmate, but I needed her on my side.

"I'm not even getting involved in this. But I heard about what happened at First Editions and we're not having it here. Now stop it and be nice."

Yes, Inge, we said, heads lowered. We were like two little boys who had been told to shake hands and make up.

"If you'll be good, I can bring you some cookies the chef has just baked."