It was the name that first caught my eye. There was something familiar about it that tickled my memory, a wisp of a thought that flitted in and out of my brain. Like when you see something out of the corner of your eye, but when you turn, there's nothing there.

As I read further, a long-forgotten story reappeared, returning from its slumber. Returning to finally finish its unfinished business.

Her name was Amethyst, the story said.

Who names their kid after one of the lesser-known semi-precious stones? I said. You're almost guaranteeing she's going to become a spiritualist. 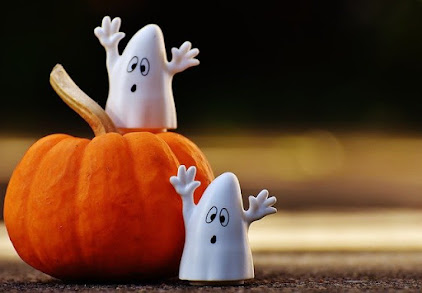 But there she was, Amethyst. And she was certainly a spiritualist of a sort. She regularly communicated with ghosts, and had even had sex with them over a number of years.

I remembered where I knew that name.

She was the woman from Bristol, England who had been dating a ghost a couple years ago. I had written about her in August 2018 because she had gone on the British TV show, This Morning, to tell them about her new ghostly boyfriend whom she had originally met on holiday in Australia.

Two months later, she went back on This Morning and announced that she was going to marry her ghostly boyfriend, Ray. He had proposed while they were on holiday in Thailand, and they had even joined the mile-high club during the flight.

Well, the wedding is off now. The second-ever (that I know of) wedding between an alive woman and a ghostly man is not going to happen, and I'm a little broken up about it.

The other marriage between Amanda Teague Sparrow and Jack Teague, a pirate who had been dead for 300 years, ended in February of this year. Amanda not only divorced Jack, but she exorcised him after he became overly possessive of her and she developed life-threatening health issues.

Just like that, another ghostly relationship has bitten the crypt dust. Amethyst went back onto This Morning, and said that she was no longer going to marry Ray.

The problem, said Amethyst, is that he had started hitting the boo-ze and doing drugs, and she is not having it. I don't know what he was drinking, but I'll bet it was spirits.

"It was going really well until we went on holiday and that was about last May and then he completely changed. I think maybe he fell in with a bad crowd when we were on holiday. He just started becoming really inconsiderate, he’d disappear for long periods of time, when he did come back, he’d bring other spirits to the house and they’d just stay around for days."

Wait, wait, go back a bit. Your ghost fiancé would. . . disappear?

I mean, isn't that what ghosts do? That's kind of their thing. How do you know he actually disappeared and wasn't just playing a really long game of hide-and-seek? Or he fell asleep on the couch and just fell in?

I'd like to say we all saw that joke coming, but since no one has ever actually seen Ray in the first place, that might be a little insensitive.

But it wasn't the regular disappearing act that upset Amethyst so much.

"I think he started doing drugs and partying a bit much," she told This Morning's hosts, Holly and Phillip. "He used to come back and these spirits would stay for days at a time. There’d be crashing and banging and strange noises."

Again, this is their thing. Banging and strange noises is how they make their presence known, especially if they're always invisible. Which Ray is.

When Amethyst announced their engagement two years ago, she said they were having trouble finding a ring because Ray was being "picky" about finding the right one.

I don't know why it was even up to him. Something tells me Ray didn't have any money to actually buy the ring himself and Amethyst would be the one to buy it in the first place.

When she announced their engagement, Amethyst was also hoping that she and Ray would eventually hear the pitter-patter of tiny invisible feet when they started a family. But she wanted to be careful of how she brought it up to him.

She said, "I don’t want to scare him off by talking about babies."

Maybe this is the best way to get rid of a ghost from a haunted house: Just say you're in love with it and want to start a family.

When Amethyst boo-ted him out of the house, she did a sage cleansing and said some incantation to get rid of him "as you would any other spirit, really."

She also placed black tourmaline around the house. Tourmaline is another semi-precious stone, and is probably also her sister's name.

It's certainly easier than throwing all his crap out on the front lawn and changing the locks.

When it's all said and done, this is probably for the best, since I don't think he was prepared to start a family with Amethyst. As a ghost, he probably had a Hallo-weenie.