No, you read that right. She married an elder tree last year.

No, "elder" as in the species of tree.

Yes, I imagine he is older.

No, I don't know how much. It doesn't matter.

We shouldn't make any judgments about their age difference. Besides, I like spring-autumn romances.

According to the Daily Mirror (official motto: "You look so familiar."), Kate left her two kids and her boyfriend at home so she could party with her fronds — I mean, friends.

She told the Mirror, "It was a little gathering with two friends where we raised a toast and had a glass of elderflower champagne."

Wait, what? A woman marries a tree and then leaves her kids at home while she has a party with their stepladder — Dadder! I mean stepdad! 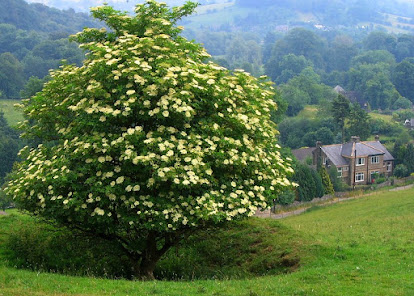 I understand the need to get away with your spouse once in a while, but she took two friends, so it's not like this was a private party. I figured Treebeard — The Mirror didn't give his name, so I picked this one — was an important part of her life, so why is she leafing her kids out of her special day?

And what about her boyfriend? She's married AND has a boyfriend? Sounds like she's got more men in her life than you could shake a stick at.

Kate, who changed her last name to Elder, said she and her hus-branch are happier than they've ever been, and they have no plans to break anything off, least of all their marriage.

The traditional first anniversary gift is paper, but that seems cruel and barbaric. Like if your spouse gave you something made of your own skin.

Kate dotes on her spruce — spouse — and pines for him when she's away. She visits him up to five times a week, and said she will remain "tree-voted" to him. (That one was The Mirror's.)

Regular readers may notice a pattern to some of my columns. Invariably, a British or Irish woman has married something rather unusual: a chandelier, a ghost, or a body pillow. In those cases, it's a question of the women finding something that made them happier than past boyfriends or husbands.

Even Kate said that her nup-tree-als was one of the best decisions she had ever made, after which the father of her children could be seen sobbing in his car.

But in this case, Kate married Treebeard because she was inspired by women activists in Mexico who held similar ceremonies to protest illegal logging and land clearing in their country. Kate said she married her "one and only" as part of a protest campaign to stop a three-mile bypass that would have cut through Rimrose Valley into the Port of Liverpool.

"Trees will always come first. They do keep us alive," she said.

Kate said her 15-year-old son was "a little" embarrassed by his mom tying the knot, but he does see the bigger picture. I guess he's a chip off the old block.

Kate said marrying the elder tree has also changed who she is as a person. She stands straighter, her skin is tougher, and she's a lot more poplar.

Actually, what she said was, "It's something which has made me feel a bit more confident about myself. I don't care about what anyone else says. Marrying the tree has given me a new purpose. I feel like a changed person."

The Mirror said last year's ceremony was "attended by dozens," but I'm stumped about whether those dozens were human or not.

I also don't know who actually axed whom to get married though. Did he pop the question, or was that just one of his twigs snapping?

These days, Kate can be found climbing among the branches of her husband, possibly getting a little knotty, or just hanging out and chatting.

She said, "I make sure to stop off, even if it's just for a five minute wander. I like to just sit there and soak in the surroundings. I like the peace and quiet. Often I like to talk to the tree, I say hello and thank you for your good energy."

Kate describes how she and Treebeard met and she makes it sound like she was at a club. She was in the park tree hunting one day, and she saw several oaks — "I was like 'oh yeah nice, nice, nice.'" — when she spotted Treebeard.

"That's the one," she thought. They had a whirlwind romance, although that may have just been the regular wind in his hair, and the two joined in holy ma-tree-mony.

"This one stood alone amongst the trees," said Kate. "I just feel like trees are people. Sometimes you just know. You know if you feel attracted to someone or smile at them as you walk past, there's just a natural attraction."

Kate wants everyone to others to be as happy as her, and has called for an annual "Marry A Tree Day," to encourage more British people to marry their foliage.

I don't know if I could marry a tree though. I'd rather marry something with two lips.

My new humor novel, Mackinac Island Nation, is finished and available on Amazon. You can get the Kindle version here or the paperback version here.
Britain England trees
Location: Orlando, FL, USA