Ghost Hunter Warns Ouija Boards Should Not Be Used by Untrained

A UK ghost hunter was "gobsmacked" when he saw that the store, Poundland, was selling Ouija boards for — you guessed it — 1 pound.

Poundland (official motto: "Not what you're thinking") is a British variety store with over 800 locations throughout the United Kingdom. And among all their various Halloween items was what they were calling a "spirit board," or what we Americans call a Ouija board.

Paul Marsters, who is a member of True Paranormal Events UK — please tell me he's called "Master Marsters" — said "all Hell could break loose" if the Ouija boards were used improperly by untrained civilians.

Before we dive too deeply into Marsters' totally not crazy or attention-seeking warnings about a child's game, we need to answer one very important question: Is it pronounced "wee-juh" or "wee-jee?" 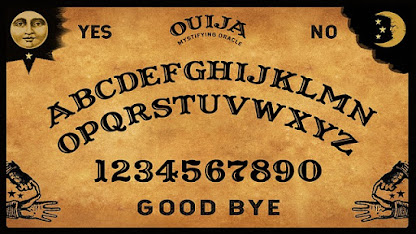 When I grew up in Muncie, Indiana, we all pronounced it "wee-jee," rhyming it with that thing you use to wipe water off your car window, the squeegee.

None of us could ever explain how the letter A came to be pronounced with a long E sound, but then again, ours is a state where our city, "Versailles," is pronounced the way it's spelled (vur-SAILS), and not the way the French say it (vair-SY).

Still, it wasn't until I started watching British television that I learned that all those British people have been pronouncing Ouija wrong for decades: "wee-juh."

Regardless of how you correctly pronounce it (wee-jee), it's apparently a portal to Hell and if you don't treat it with the appropriate respect, you could unleash said Hell into your dining room just by fiddling around with the devil's pager.

Marsters told the Hull Live Daily Mail, "Ouija boards are most certainly not a toy and should not be available for kids to buy in pound shops for Halloween, never mind adults that are not trained in how to use them."

He continued, "We won't even touch Ouija boards. We only have mediums to do that who are trained as they are just too dangerous and you don't know what it will entail using them."

I assume he's referring to the Ouija boards themselves, and not the mediums.

Also, you can get an education in spiritualism? And there's specific training on how to use Ouija boards? Like, there are seminars and classes I can take? Could I actually get a degree in spiritualism? Are there any YouTube videos I could watch, you know, just to get the bare bones.

I could even take online classes from Transylvania University, which is a really-for-real private university in Lexington, Kentucky.

"Transylvania: Get possessed! By school spirit!"

"It does not matter if they are plastic or wood, if the planchette spells the word 'Zeus,' it is a demon trying to come through, and you should not even say the name, never mind continuing to communicate with it."

Well, thank you, Paul for telling us about the Ouija safe word. Now that you've shared with the world what word not to use, I'm sure absolutely no one will try to do this for themselves.

And I'm especially sure absolutely nothing will happen since Ouija boards are fake and it requires two people to both secretly push the planchette and say they totally weren't doing it, I swear, no seriously, as they try not to smile.

But Marsters is undeterred. He said "Everyone in the paranormal spirit field is angered — the risks of untrained people using Ouija boards is unimaginable so it is ludicrous that Poundland are selling them off."

Really? Everyone? Everyone in the paranormal spirit field is angered about untrained people using Ouija boards? This is the thing that has everyone up in arms?

I'm sorry, I just have a tough time accepting the outrage from "everyone" who thinks "Ghostbusters" is a documentary or believes a shiny rock from some guy's rock tumbler in his garage will channel the energy of Jupiter's seventh moon to increase my wealth.

(Jupiter's seventh moon is Ganymede, by the way. I had to look it up.)

Marsters, who is apparently that one scientist everyone ignores until radioactive dinosaurs invade New York, says that Poundland couldn't have picked a worse time of year to sell these boards.

He said, "On Halloween night, the veil into the spirit world is very thin and people are buying these Ouija boards just for Halloween, so I dread to think what will happen when these boards are in the wrong hands."

Yes, because if there's one thing that 2020 has taught us, it's the dangers of letting idiots who lack any specialized training or knowledge use a device that lets them communicate with their demonic followers.

It could have been worse though. A spokesman for Poundland said that the boards were only sold in 90 of their 800+ stores. Plus, they were only marked for adults and were prevented from being sold to children, so we're probably okay.

"In any event, they’ve now just about vanished," said the unnamed spokesman, who no doubt felt very clever about that joke.

So, if you spot any demons roaming the Earth after Halloween, blame the amateurs who clearly spelled "Zeus" on their Ouija board.

Just remind them to vote before we send them back to Hell.

My new humor novel, Mackinac Island Nation, is finished and available on Amazon. You can get the Kindle version here or the paperback version here.
Halloween Ouija board Spirits United Kingdom
Location: Orlando, FL, USA