What Has Your State Been Quarantine-Googling?

It's been kind of boring for the last eight months.

Maybe not to the nation. The national news cycle feels like my kids' Netflix queue: a lot of drama, a lot of horror, a little romance, and plenty of dark comedy.

So we've all been looking for unusual ways to alleviate the boredom and solve some personal issues during the pandemic. The people at Zippia.com, the job search website, found the most interesting ways people have been spending their time. 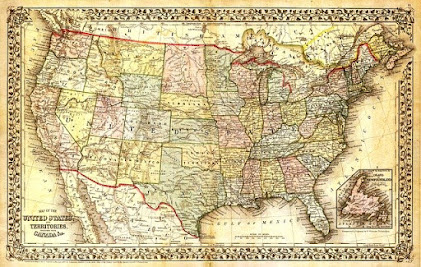 A couple months ago, Zippia looked at Google Trends and tried to determine the most interesting things each state was searching more than any other state. They searched through hundreds of terms between April and August, and identified the searches they thought were the most interesting, so this is a subjective definition of interesting.

Starting with what may be the most uninteresting state of all: Kansas spent the quarantine searching for "cross-stitch."

Seriously, Kansas? This was the most interesting thing you could come up with? I knew you guys were  pretty boring, but this is what passes for peak interesting in Kansas? Did you already blow through your paint drying videos?

Compared to you, Missouri, is a bear riding a shark on a rocket over Snake River Canyon. Their most interesting search was "meth recipe."

Eight states were all about alcohol. Minnesota was curious about "boxed wine," Mississippi wanted to know about "vodka pops," Nebraska searched for "Mike's Hard Lemonade," and Wisconsin wants to know about a "Bloody Mary."

At least I think it was a Bloody Mary; they could have been researching the urban legend where if you stand in front of a mirror and say her name three times, she'll text you to remind you to vote.

South Carolina searched for "frosé," which I didn't know what that was. Turns out it's frozen rosé wine, which sounds like it was invented by people who use the word "adulting" well into their 30s. (Special thanks to my son, Ben, for that joke.)

Tennessee's search may have actually led to something. Between April and August, they searched extensively for "Cracker Barrel alcohol."

This was an odd thing to search for, but lo and behold, on September 19, Cracker Barrel announced they were going to start serving alcohol in its restaurants.

Way to go, Tennessee! You searched and Cracker Barrel listened! Now if you could just start Googling "Wendy's fixes their nasty fries," that would be great.

Meanwhile, New Mexico has zero F's left to give because their big search was for "day drinking." There may not be much happening in New Mexico, but this is certainly a lot more fun than cross-stitch!

On the other hand, Colorado has had enough because they searched for "how to stop drinking." You guys legalized recreational marijuana in 2012, so I think you already answered your own question.

California is all business as usual, because they were searching for "cool Zoom backgrounds." Way to stay focused, California. No one thinks you're a brown-nosing suck-up at all.

On the other hand, Indiana got bitten by the entertainment bug. We searched for "how to be a YouTuber," and it's pretty simple. Upload videos of yourself talking about random nonsense, and fame is certain to follow. Not real fame, of course, just YouTube fame.

Thirty percent of the country has been thinking about food: Alabama searched for "BBQ," Rhode Island was curious about "Chinese delivery," and Wyoming wanted "hot wings." Arkansas was looking for "Little Debbie Cakes," which is adorable and now I'm jonesing for some Zebra Cakes.

Alaska was searching for "pizza delivery," but I think you're going to have a tough time figuring that one out, Alaska. Everything is so far away up there, you're just better off making it at home. Can I get one with extra bear pepperoni and moose cheese?

Virginia's most interesting search was for "grilled cheese." My niece and nephew live there, so I think I know who's responsible for that one.

Idaho figured out how to handle 2020 because they want to know "how to delete Facebook." I don't know if they meant their own personal accounts or Facebook as a whole, but given how terrible the social network has become, I'm hoping it's the latter.

New Jersey is looking for a job, because they searched for "virtual interview." (Good luck, New Jersey. Ask California about the Zoom backgrounds and don't forget to wear a tie.)

Florida must have gone day drinking with New Mexico, because they want to know "how to sleep at work." You should talk to Delaware: Their most interesting search was "hammock."

Louisiana wanted to know "how often you should wash your hair." Basically, if your hair holds its position after you bend it, the answer is "a lot more."

And South Dakota is just tired of the rest of us, because they wanted to know "how to move to Canada."

Of all the states, Connecticut has the right idea. They searched for "dog adoption," and that's something we should all consider. Nothing alleviates boredom better than a new puppy.

Well, that and day drinking with New Mexico. Those guys sure know how to party!

My new humor novel, Mackinac Island Nation, is finished and available on Amazon. You can get the Kindle version here or the paperback version here.
Google Indiana pandemic.
Location: Orlando, FL, USA