Since there hasn't been much going over the last couple of weeks, I wanted to take a look at some of the unusual stories you may have missed as you have been relaxing, taking a break from social media, and catching up on your favorite shows.

One story I found is how you can now smell like a pair of very expensive Christian Louboutin shoes (pronounced LOO-boo-tan, because they're French and they mispronounce everything). Louboutins have a reputation of being very expensive, uncomfortable shoes that fashionable women everywhere claim to love but can't wait to get off their feet.

Designer Christian Louboutin just kicked off his first-ever fragrance collection, Loubiworld — which is probably pronounced LOO-boo-jelly — a collection of different scents that are supposed to smell like snooty elegance. They all carry names like Loubicrown (Loo-boo-murder-hornet) and Loubiraj (KEV-in). There's also Loubifunk, Loubirouge, Loubidoo, and Loubicroc. (And yes, these are all real names of the different fragrances.)

Loubirouge is supposed to be the "true incarnation" of the smell of the famous red-bottom shoes. I would have thought that was the Loubifunk, which is what a woman's feet smell like after spending several hours jammed into $1,300 medieval torture devices.

There's also the Loubicroc, which is what your feet smell like after wearing Crocs and sweat pants three days in a row. And of course, there's Loubidoo, the kids' cartoon about a group of underfed, well-dressed teenagers and a French poodle that solve mysteries.

The designer told Allure magazine that his fragrances "are based on dream worlds, erasing the frontier between reality and imagination," which is basically nonsense fashion talk for "expensive."

I've had pencils that made that exact same promise, and they just smelled like pencils. 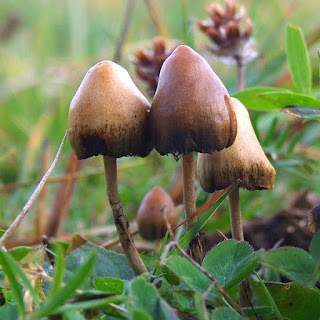 You know what will erase the frontier between reality and imagination? Psilocybin mushrooms, also known as psychedelic mushrooms or magic mushrooms.

If you want to erase the frontier between reality and imagination, and you don't have a pencil, never fear. Oregon just passed a ballot measure that approves the use of magic mushrooms for certain therapeutic applications.

As long as their magic mushrooms came from a licensed service provider, Oregonians will be able to giggle madly and stare at their hands for hours, shouting, "DAVE! DAVE! LOOK AT MY HAND, MAN! LOOK AT IT! IT SOUNDS LIKE PURPLE!"

Speaking of hands, if you're feeling lonely and you ache for the physical touch that only a disembodied robot hand can give, you're in luck. Researchers in Japan have invented a robot hand that lets you simulate holding hands with a loved one.

According to the UK's Daily Star tabloid, the researchers at Gifu University (official motto: "No, not Jifu!") said that because it was difficult for some people to find a girlfriend, they wanted to create a way for lonely men to "experience holding your girlfriend’s hand more easily than finding a girlfriend." It'll be like dating Thing from The Addams Family.

The researchers call it "Osampo Kanojo," which roughly translates as "My Girlfriend in Walk." It's made to sound, smell, and sweat like a real woman's hand.

I've been married for nearly 27 years, and I couldn't tell you what my wife's hand sounds like.

This is a country that has already created some of the first human companion robots, several kinds of virtual companions, and not to mention girlfriend and boyfriend body pillows. So it stands to reason that they're going to find a solution for the lonely man on a budget.

So if you can't afford a complete human sex robot, and your cat peed on your last girlfriend body pillow, let Osampo Kanojo give you a h— I mean, a solution to your problem.

Use Osampo Kanojo to pretend you're holding hands with your dismembered pretend girlfriend while you're going on a walk or watching movies. And for nothing else.

When completed, Osampo Kanojo's skin will be as warm as a human hand, and there will even be pores that can release liquid from a reservoir, so the hand feels like it's sweating. Just remember to fill up your girlfriend's sweat reservoir before your next moonlight stroll.

Back in this hemisphere, there's some exciting geography news from our neighbors to the north: A little town in Quebec has selected a new name for itself, replacing the one that was chosen for them in the late 1800s: Asbestos.

The town, which is about 80 miles east of Montreal, was home to the Jeffrey Mine, the largest asbestos mine in the world. The Royal Mail service started referring to the town that sprang up around the mine after the mineral, and the name stuck.

Rather than be known by its hazardous, potentially lethal namesake, they have changed it to Val-des-Sources, which means "valley of the springs." This was a much better choice than their other option: Giant Barrel of Poison.

Which reminds me, I hope everyone voted this year.