Cut Me Some Slack on Mobile Phones

When I was a kid in the 1970s, getting a phone call was special, like you were important. Like getting a surprise gift that only you could open.

We only got one or two calls at our house during the week, usually for my mom or dad, but occasionally it was for me. Even though the calls were from friends of mine or my parents, I was always awed. That, out of all the people in the world they could have called, this person called my house.

It was like Bell Telephone had built their entire network just so this person could reach out and touch us.

My sister and I would race to answer each call, because whoever answered it received the gift.

Occasionally, it would ring during dinner, and my sister and I would spring up. My dad would always stop us with a shout.

"But someone's calling," I would say.

"If it's important, they'll call back."

My dad had more faith in our popularity and other people's persistence than I did.

I was flabbergasted. Of course, it's important! Why else would anyone pick up Alexander Bell's miraculous invention and press a bunch of buttons, or turn the rotary dial for 20 minutes if it wasn't important? 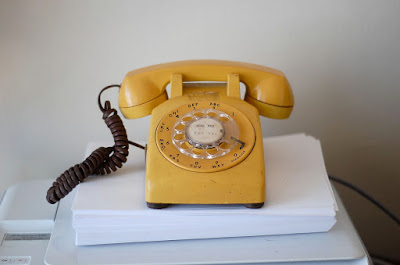 I would sit down and secretly hope that someone was calling with dramatic news that had to be dealt with at that exact second, and my parents would realize I had been right all along.

Years later, my dad was still in the habit of not answering the phone, so I said he should get an answering machine.

"So people could leave a message when they call."

"They'll call back if it's important."

"You don't answer the phone then either."

In all these years, my dad never got an answering machine or voice mail.

He didn't even get a cell phone until six years ago. He said he never needed one because there was no one he ever needed to talk to when he wasn't at home.

"What if I needed to call you?" I asked.

"Yeah, yeah, I'd call back if it's important. What if you needed to call me?"

He finally got one because he traveled to his condo several times a year, and he didn't want a landline there. So he bought a cell phone but refused to turn it on unless he needed to make a call. Now, he texts with some regularity, and I stopped calling his home number because he'll answer his cell phone any time it rings.

Now I understand my dad's reluctance to answer the phone. But, unlike my dad, I don't have any illusions as to my popularity, I have caller ID.

I immediately know if it's a business call, a friend, or a spammer. I know when I should answer it, let it go to voice mail, or blast them with a referee's whistle.

The calls come at inconvenient times, like when I'm eating. Or working. Or reading. Or watching TV. Or sleeping. Or playing a game on my phone. Or staring at my phone with intense loathing. Or doing literally anything else where I don't have to talk to anyone.

So I ignore most of the calls. In fact, if I answer your call, it's because I like you a lot, or you pay me money. (Or both; I like my clients.)

Except now people want to communicate with me through something called Slack.

For those of you who remember the IRC and AIM chat programs of the 1990s, it's like that, but for business people who think it's somehow more efficient than texting, email, Twitter, Facebook, or Instagram.

There are literally six different ways to reach me, but you want to add a seventh?

Instead of making communication much easier, Slack just clutters it up even more.

Invariably, the person who messaged me will send me an email to follow up on it.

"Hey," says the email, "I just sent you a message on Slack. Please go check it out."

"Why didn't you just email me the message?"

"Because I put it on Slack. It's more efficient this way."

"More efficient than sending another message to make sure I got the first one? And then a third message to go check on the status of the first two?"

Once, to be a smart ass, I read the message, then replied to their email. "I read it, now what?"

"You're supposed to write a response!"

They said something unmentionable and stopped pestering me on Slack, which is what I wanted in the first place.

These days, if you want to get ahold of me or send me a message, call my dad.

Just make sure it's important.