Some People Never Learned to Apologize and It Shows

on April 30, 2021
Some people are terrible at apologizing, and it shows that your parents either did a poor job teaching you, or you're just a terrible human being.
I'm sorry, that was not a nice thing to say. I know that I hurt your feelings, and I will do my best to never say anything that mean again.
Did you see that? That's how a good apology goes. I expressed regret, explained how I recognized that what I did was wrong, and how I will ensure it doesn't happen again.
Here's how not to apologize:
"I'm sorry your feelings got hurt," or "I'm sorry your parents didn't teach you better," or "I'm sorry you're such a baby."
It reminds me of an incident during the 2000 presidential campaign, which Gen Xers insist was only ten years ago, 12 tops.
George W. Bush and Dick Cheney were on stage during a press event. Bush leaned over to Cheney at one point, unaware there were open mics nearby, and said, "There's Adam Clymer, major-league a-hole from the New York Times."
(Only he didn't say "a-hole," he said the actual a-hole word.)
Democrats clutched their pearls and collapsed on their fainting couches. They wondered how any decent human being could use such coarse language and be fit to lead our nation.
Bush's only apology was, "I regret that it made it to the airwaves." 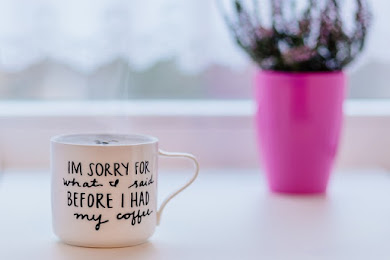 I had never heard of a worse apology until this week.
There's a popular subreddit (a forum on Reddit.com) called Am I Adam Clymer.
Just kidding, it's called Am I The A-hole, or AITA.
On this list, people ask questions about situations like, "My mother-in-law got drunk at my wedding and screamed at me, so I had her arrested. Am I the a-hole?"
Then people respond and tell the poster if they're the a-hole or not.
A particular AITA story was trending on Twitter this week from someone called Medium_Cook7987 (we'll call them MC) who said their sister (SC) was angry for ruining her apology dinner. 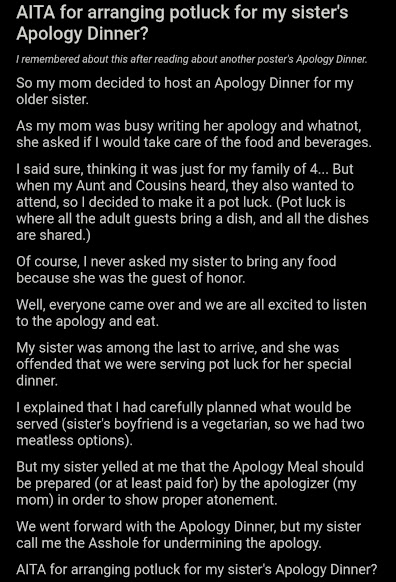 Apparently, MC's mom owed SC an apology dinner for some offense the mom has given. But — BUT! — there was absolutely no explanation what an apology dinner was.
As MC wrote, "As my mom was busy writing her apology and whatnot, she asked if I would take care of the food and beverages."
Wait, so not only is there such a thing as an apology dinner, Mom had to write a speech? She's going to stand up and give a speech?
This raised so many questions. Like, was mom so busy with this speech that she had no time to make dinner? Are these catered events? SC brought her boyfriend, so does that mean we can bring guests?
MC assumed there would just be four of them for the big apology dinner, but their aunt and cousins heard about it, and they wanted to come too. So MC decided to make it a potluck dinner.
And then, she explained to the readers what a potluck dinner is.
Remember, we still don't know what an apology dinner is, but MC explained something that I believed the entire world knows about.
Except MC's sister was wildly offended because "we were serving potluck for her special dinner."
Wait, so this is a special dinner? This isn't just a dinner where Mom makes her daughter's favorite beef-and-noodles with mashed potatoes? This has rocketed to the level of special birthday dinners or congratulations on getting a job?
SC actually yelled at MC because mom should have prepared, or even paid for, the meal "in order to show proper atonement."
So, a couple Domino's pizzas, and we're good, right? Like, I'm sorry I punched your boyfriend, here's a Pepperoni Lover's?
The family went ahead and ate the dinner, but SC called MC an a-hole for "undermining the apology."
MC asked, "So AITA for arranging potluck for my sister's Apology Dinner?"
No, of course not. I mean, it's rude not to explain what an apology dinner is, or why a family member is forced to grovel and go to great lengths to put on a big show for the extended family.
The aunt and cousins are a-holes for inviting themselves over to gawk at what should be a private family affair. I don't park my ass on the couch with a tub of popcorn whenever my sister-in-law and her husband are fighting. Extended family doesn't get to watch family drama.
But SC is the bigger a-hole for expecting her mother to make dinner and write a speech, and then get upset because Mom was not inconvenienced to her satisfaction. That's just a sad state of spoiled entitlement, and I think SC should apologize.
And if she doesn't like it, well, I regret that this story made it to the newspapers.