Pancakes or Waffles? Pizza or Hamburgers? How to Find the Answer

on July 30, 2021
My favorite coffee shop uses an ingenious method to encourage tipping. They put out "poll jars" that ask either/or questions, and you tip according to your preferred answer.
For example, they might ask, "Who was the best Batman, Ben Affleck or Christian Bale?" You make your choice, drop your tip into the jar, and the one with the most answers is the winner.
Although there's no winner to that question because it's a flawed premise. The correct two choices should have been Adam West and Michael Keaton. Even George Clooney, whose Batman costume had nipples on the suit, was a better Batman than Ben Affleck. But there was no third option for that, like leaving a pile of money on the counter.
Later, the baristas will post other pop culture questions like "Which is better, pancakes or waffles?" Or "Who would win in a fight between the Flash and Thor?" 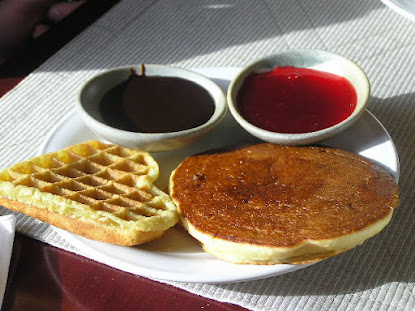 They also post deeper philosophical questions that seemingly have no real answer and that the truth can only be determined by the amount of money in either tip jar.
Questions like, "Which food would you eat every day for the next month, pizza or hamburgers?" Or "Which color would you wear for the rest of your life, red or blue?" Or "Would you rather be rich and unknown or famous and poor?"
It's a fun way to get a sense of how people think and for the baristas to make a little money. (Be sure to tip your baristas and restaurant servers! No exceptions.)
Except I feel a little left out. Most people, including me, tend to pay with their credit card, which means we don't get to cast our vote on these are very important questions. I want my vote to be heard.
Am I to be penalized because I don't carry cash? How can I let people know that pancakes are infinitely better than waffles, or that Flash could kick Thor's ass in two seconds?
Maybe I have strong opinions on the "pizza or hamburger" question (pizza) and would like to weigh in. If I were rich and unknown, I could easily skew the results with a well-placed $100 bill.
But that's a small problem. The bigger problem is that it allows people to vote for what is clearly the wrong choice, making them feel justified in their misguided opinions. My favorite coffee shop is missing an opportunity to correct some of society's ills with this tipping system. It could be used to educate people and teach them the error of their ways by rewording the questions — in a very subtle, barely noticeable manner — to plant tiny seeds of education in the tipper's mind.
For example, take the question, "Should toilet paper unroll over the top or under the roll?" This is worded in such a way that people think both options are equally valid and correct. When in actuality, there is only one correct answer, and the other way is completely wrong.
Let's rewrite it in that subtle, barely noticeable manner and see how it looks: "Should the toilet paper unroll over the top or are you a terrorist sympathizer?"
Did you catch it? If you weren't paying attention, you might have missed it. Go back and read it again.
Got it? Now, upon reading this question, the under-rollers would say to themselves, "Oh my, I'm certainly not a terrorist sympathizer. Are terrorist sympathizers under-rollers? I should go home and change all my toilet paper rolls immediately."
And now we have educated the public, righted a great social wrong, and still helped the barista make some money.
Let's look at another one: "How do you cut your sandwiches? Corner to corner or straight down the vertical middle?"
This is a tough one. Growing up, my mom never cut my sandwiches corner-to-corner, even though I asked her to. I thought corner-cutting was the fancy way because that's how they did it in restaurants, but she only cut my sandwiches the boring way, straight down the middle.
However, now that I'm older and wiser, I realize that corner-cutting is unbalanced because the "good" crust — the top crust — is all on one piece, while the "bad" crust — the bottom — is all on the other. But with a middle cut, all crusts are equally shared on both halves.
So the question should be phrased as, "Should a sandwich be cut straight down the middle, or do you hate puppies?"
Once again, the corner-cutters would see our more subtly-phrased question and think, "But wait, I LOVE puppies! I'd better cut my sandwiches the right way from now on."
Some people may think these are loaded questions designed to trick people into answering one way, and therefore, dangerous. Those people are puppy-hating terrorist sympathizers.
Remember, this isn't actually about surveys. We're trying to teach important life lessons by cleverly disguising the Socratic method in order to get people to think about their life choices.
I can't wait to put my new system into action next week. We're going to start with the question, "Is a hot dog a sandwich or were you dropped on your head as a child?"