Can You Tell The Difference Between Plastic and Metal?

on August 13, 2021
Years ago, I dated a woman who had never baked a pizza in an oven.
I mean, this wasn't a defining characteristic of hers in the way you would describe a woman as being tall or a good singer or always wears yellow. And I never set out to find a woman who had never cooked a pizza by herself before.
"Man seeks woman in early to mid-20s. Must have grown up without using large kitchen appliances."
Instead, I discovered this when she was baking a frozen pizza while we were visiting my mom, and we smelled something burning.
"The cardboard!" I shouted when I went to investigate.
"What?" she said. "That doesn't go into the oven?"
I wasted several precious seconds as the cardboard smoldered to stare, dumbfounded.
"No," I finally croaked. "It's paper." 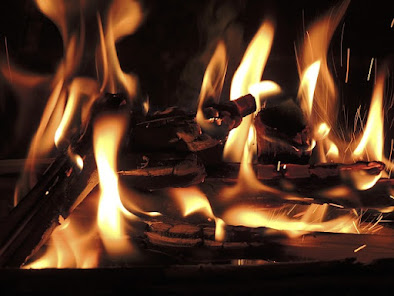 I managed to retrieve the cardboard before making jokes about her nearly burning my mom's house down, as a supportive boyfriend does.
"I didn't know!" she said. "I've never needed to cook a frozen pizza. Why would I do that?"
She said it in such a way that I didn't know if I was being insulted for liking frozen pizzas or if she was a precious snowflake who never ate them.
And before you ask, no, I did not marry this woman.
Also, no, the pizza thing wasn't the dealbreaker. But it was a factor.
This memory bubbled up like bad pepperoni recently when I read in The Manchester (England) Evening News about 24-year-old Tiana Lowe, who thinks IKEA should redesign one of their plastic trays because she melted hers in her oven.
She bought a tray on sale for only £1 ($1.38) at the Swedish retail giant because it was painted metallic silver, and she thought it was a good bargain.
Except when she cooked some potato pancakes in the oven, the tray melted, ruined the oven racks, and filled her flat with burning plastic fumes.
"We could smell burning, so we opened the oven to find a big puddle of melted plastic and lots of black smoke coming out," Lowe told the Evening News. "It was all dripping from the tray, then I checked and realized it wasn't an oven tray, it was clearly plastic and it'd melted all over the entire oven."
So asked her friends to Google the product — called TILLGÅNG, which means "access" in Swedish — and they discovered it's a plastic tray.
I don't understand the confusion. It's light, and it cost one pound. Why would anyone think it was metal? The price tag should have been a dead giveaway. If nothing else, you could have clanged a metal spoon against it. If it didn't sound like a cheap gong, it's plastic.
According to the IKEA website (official motto: EVERYTHING HERE IS CAPITALIZED), the TILLGÅNG is "almost like a superhero. It has a dirt-repellent and scratch-resistant surface, it can be machine washed and it is suitable to use both outdoors and indoors - and it also fits most trolleys."
It's so much like a superhero that the TILLGÅNG description was actually Green Lantern's original oath.
"In brightest day, in blackest dirt,
Put me in the dishwasher, with soap a-squirt
Let those who scratch me learn their folly
Plus, I fit on any trolley."
Lowe said IKEA should make the trays look like actual plastic and possibly change the color. Or at least put a giant warning sticker on them.
"But it's my error, not theirs," she said.
I'm glad she owned up to the error and could laugh it off, even if she spent several hours cleaning up the oven and the kitchen because of the fumes.
Here in America, there would be class-action lawsuits that lead to a giant orange warning sticker written by a committee of corporate lawyers: "WARNING: Whereas the party of the first part, known hereafter as "TILLGÅNG," is made of a non-flame-resistant plastic, and whereas plastic has historically been known to melt, the purchaser of TILLGÅNG agrees to indemnify IKEA and its vendors, partners, employees, and subsidiaries if the tray is improperly used and causes it to burn, combust, blaze, ignite, char, combust, incinerate, scorch, smolder, or otherwise melt in any fashion."
Of course, any sane person would just write, "Do not put in the oven," but no lawyer ever got rich by being simple and direct.
Lowe said she'd been royally mocked on Facebook because of it, but she "expected it."
"I found it hilarious," she said. "It's something I'd do. I have my ditzy blonde moments. I wouldn't say I'm not intelligent but I do have my moments."
But not everyone took it as well as she did. Lowe's fiancé was more upset that his dinner was ruined than the state of the oven.
Which tells you everything you need to know about that guy. His wife-to-be is cooking his dinner, makes an innocent mistake, and spends several hours cleaning it up while he's grousing about his potato pancakes.
Dude, make yourself useful and fire up a frozen pizza. Just don't forget the cardboard.

My new humor novel, Mackinac Island Nation, is finished and available on Amazon. You can get the Kindle version here or the paperback version here.
cooking IKEA Manchester England pizza plastic