on August 20, 2021
When you're on vacation, and things don't quite go the way you hoped, no one can blame you for being upset. The attraction you wanted to visit was closed; the restaurant ran out of their special; your hotel reservation got lost. It's enough to make anyone complain.
But there are a few things that will never happen for you. Things won't go your way, and they were never going to go your way. And getting angry about them just shows you may not be that bright.
According to a story in the Scottish Sun (official motto: "No, we do see the sun up here! Sometimes!"), a British tourist named Ron left a scathing, one-star review of Loch Ness and its monster after he and his family drove 400 miles to see the wee beastie.
Because she never showed up. 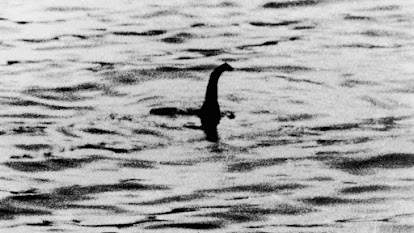 The Loch Ness Monster — "Nessie" to her friends — captured the world's imagination when British surgeon Robert Wilson captured a photo of it in 1934 and turned the small region into a £25 million-per-year tourist destination. Many people believed Nessie to be a plesiosaurus, left over from the Jurassic period.
According to Ron's complaint, he, his wife, and his kids waited for several hours in bad weather and crowded, dirty lookout points to no avail.
Which sounds like part of everyday life if you live in a town named Grimsby.
Of course, several contributing factors affected whether Nessie was going to show up on that particular day.
For one thing, it was cloudy and rainy, as he said, which meant there was a low-pressure weather system. I know from years of fishing that fish are more likely to bite during a low-pressure system than a high-pressure one when it's bright and sunny. Nessie may have been feeding on the various pike, salmon, trout, and sticklebacks native to Loch Ness.
Sticklebacks are those Canadian fish that everyone hates but are inexplicably popular.
Also, Ron and his family may have been there at the wrong time of day. Nessie likely only comes out only at dusk, just as the sun begins to kiss the horizon.
Plus, wild creatures are unpredictable. They don't keep to a schedule the way humans do. They don't show up at the same place every day for people to gawp at.
But most importantly — and I cannot stress this enough — Nessie did not show up that day because she does not exist.
There is no such thing as the Loch Ness Monster. Despite what the photo shows, it's a made-up legend.
Not only has Robert Wilson's famous 1934 photo been debunked — one of the conspirators revealed it was a hoax — but there are no plesiosaurus bones in the fossil record. That is, scientists have been searching for bones at the bottom of Loch Ness, which is a flat-bottomed lake, and they have never found any kind of plesiosaur bone anywhere ever.
Unless Bigfoot has been using them for his arts and crafts.
Despite all this, Ron from Grimsby felt that he and his family had been wronged. His feelings were hurt, his kids were upset, and he wanted to lash out.
"Don't go if you are wanting to see it," he wrote, "because you will end up bitterly disappointed like we were."
Oh, Ron, if you and your family drove 400 miles to see something that never actually existed, I imagine your family has known bitter disappointment for many years. I'm guessing they were only mildly disappointed this time.
"There's much better places in Scotland, won't be coming back," he continued, trying to make the area merchants feel bad for missing out on Ron and his easily-tricked family.
"Oh, no!" cried the merchants. "Ron and his idiot family won't come back? Now we'll only make £24,999,980 next year!"
But Ron wasn't the only one to be duped by the legend. Last year, Pim G. from Rotterdam, The Netherlands, wrote, "High expectations, but no Nessie today. The lake is wonderful but when you come for the monster, don't travel there since it will not show up."
And last year, Alex from London whined at the Loch Ness Centre, "Just tell kids Santa not real whilst you're at it. Brilliant for a visit if you want to destroy the myth of Loch Ness monster."
Boys, I don't know how to tell you this, but Nessie isn't real. Your mother and I have been keeping up the myth for all these years, eating the cookies you left out for Nessie. We even have special wrapping paper hidden in the house so you would think her gifts were really from her.
I'm sorry, Champs. I know you didn't want to find out this way, but we all have to grow up sometime, and we all learn the truth about things that were never really true.
But don't tell the other kids. Some kids still believe in the Loch Ness Monster, plus a lot of other weird things that regular people think are dumb.
Yes, like him. No, he didn't get reinstated. Well, they keep changing the dates around, so they can keep "fundraising."
Well, because some people just aren't as clever as you boys.

My new humor novel, Mackinac Island Nation, is finished and available on Amazon. You can get the Kindle version here or the paperback version here.
Loch Ness Scotland tourism
Location: Orlando, FL, USA