No One Needs a 426-Word Tomato Sandwich Recipe

on September 03, 2021
The perfect tomato sandwich is made with white bread, mayonnaise, salt, pepper, and of course, tomatoes.
There. Now you know how to make a tomato sandwich in 16 words. Anyone in a regular American kitchen should now be able to make one with the ingredients I've listed. The name alone should eliminate any confusion.
So why would anyone create an entire recipe for one? What's so confusing about the term "tomato sandwich?" I'll admit, the salt and pepper were unexpected, but even so, you know exactly what to do if I say, "I like tomato sandwiches with salt and pepper."
What else is there to explain? Do some people just smash an entire tomato between two slices of bread? Do they stick cherry tomatoes to the bread using the mayonnaise as glue? Shove Roma tomatoes inside a hollowed-out baguette? Or maybe they lay salt and pepper packets over a can of tomatoes on a hoagy roll.
It's not that hard. Spread mayonnaise on two slices of bread. Lay tomato slices on one of the bread slices. Sprinkle salt and pepper to your taste. Put on the other bread slice.
Mayonnaise side down, please. (Do I really need to explain that?)
See? It's simple. I told you how to make a tomato sandwich in 33 words or 187 characters. I could literally fit those instructions in a tweet and still have room for hashtags. 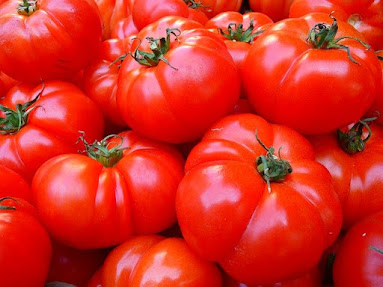 But the phrase "It goes without saying" means nothing to the people at TasteOfHome.com because they wrote an entire 426-word recipe about how to make a tomato sandwich.
To make matters worse, they used 188 of those words to explain what tomato sandwiches are, who typically enjoys them (people who grew up in the South), and when (summertime).
(Also, people from Indiana enjoy tomato sandwiches, so this is not just a Southern thing.)
If this was all new to you, let me be the first to welcome you to our planet. Please enjoy our beaches and ice cream.
Don't get me wrong, I appreciate history — the earliest mention of a tomato sandwich is in The Virginia Chronicle in 1911 — but I don't want to read a book about it, I just want to make a 'mater sammich.
That's the latest trend of recipe websites, though: The author blathers on about how Memaw made tomato sandwiches for all the kids after a long day of catfish noodlin' down at the ol' swimmin' hole. Or it's a three-volume oral history of the socio-political factors that led to the rise of tomato sandwiches as a staple of summertime cuisine. Or it's a Game Of Thrones-length murder mystery with an Agatha Christie twist at the end.
All before they get to the actual recipe.
I wish I knew why recipe writers pad their pages with this nonsense. No one really wants to know why Memaw's secret tomato sandwich recipe has such a kick. (Spoiler: It's the pepper. Also, the judge faked his own death and was the killer all along.)
The TasteOfHome recipe tells us we need eight slices of white bread, half a cup of mayonnaise, two large ripe tomatoes (sliced), and a quarter teaspoon each of salt and pepper.
Anyone who has ever made a sandwich can tell you how needlessly specific this is. We only need to know that we're making four sandwiches; we can figure out the rest.
You know you need enough mayonnaise to cover all eight slices. You know to slice the tomatoes. And you know to use salt and pepper to your personal tastes. We don't need specific measurements, we don't need instructions.
Step 1: Make the sandwiches.
Step 2: There is no step 2. Eat the damn sandwiches.
But TasteOfHome.com, who probably reads the instructions on a toothpick box, wrote them anyway.
Step 1: Slice the tomatoes. Season with salt and pepper then set aside.
Set the tomatoes aside? You just saved my bacon there, TasteOfHome! All these tomato slices were just cluttering up my workspace, and I had no idea where to put my bread.
Step 2: Spread mayonnaise on each slice of bread.
I want you to read that again.
There. Are. Instructions. For. Mayonnaise.
I shouldn't be shocked. We live in a society where car owner's manuals tell you to remove snow from your windshield if there's snow on it. A society where teenagers were popping Tide Pods because the Internet told them to.
So, I'm not surprised that someone has to explain what to do with mayonnaise when making a sandwich.
And knowing this takes the sting out of Step 3: "Top with the remaining slices of bread to close sandwiches and serve."
Whoa, that was a close one. I was about to set those other four slices aside and then put the half-sandwiches in the garage. But now that you told me to "serve" them, my guests won't go hungry. Thank God for you, TasteOfHome.com! Thank God for you.
So there you have it, my 854-word criticism of a 426-word recipe.
And now I can tell you my recipe for jalapeño popcorn.