You Can't Measure the Joy of Hot Dogs in Minutes

on September 17, 2021
"You're not fooling anyone with that salad, you know," said my friend, Karl.
Who am I trying to fool? I asked, putting a bite of chicken Caesar salad into my mouth. We were sitting at the bar at First Editions, our favorite literary-themed bar, for a late and socially distanced lunch.
"I'm saying, this is the first time I've ever seen you eat a salad," he said. "Is this actually your first-ever salad?"
I eat salad! I protested, careful not to spray croutons. Besides, you're eating hot dogs. Do you know what those things will do to you?
"Are you going to start lecturing me about that 36-minute thing?"
That '36-minute thing' was the recent news from the University of Michigan that said eating a hot dog would take 36 minutes off your life. The study ranked more than 5,800 foods by their nutritional burden on people. They found that substituting 10 percent of your calories from beef and processed meats for fruits and vegetables each day could add 48 minutes of healthy life.
No. I won't lecture you. I'm sure she pounced on you the second that story came out.
"Kid, she lectured me like an overprotective parent sending a 12-year-old off to college."
'She' was Alexis, Karl's younger daughter. She was an organic, vegan, anti-chemical activist who had completed her MBA this past spring and was now working at a large nonprofit whose mission was to clean the oceans. Alexis lived with Karl and was continually badgering him about the unhealthy food he ate (all of it) and praising him for his healthy choices (none). She also complained about his 40+-year-old pickup and that he drank non-organic rum. 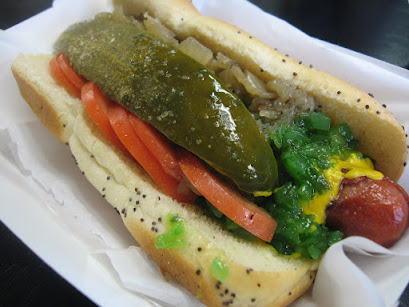 Karl was getting up in years but wasn't showing any signs of slowing down. Including what he ate for lunch.
"She's been giving me oatmeal with strawberries for the past five days, and said that adds 13 minutes to my life each morning. She said I was up to 65 minutes for the week and patted me on my head. I'm her father, for God's sake!"
Yeah, but you're shortening your life with those hot dogs. (Or 'Frankfurter sandwiches' as the study called them. Seriously, scientists?) That's 72 minutes right there.
"Wrong," said Karl. "These are Chicago dogs, complete with pickles, tomatoes, sport peppers, and relish. With the vegetables, that knocks the hot dogs down to 30 minutes tops which means I'm still up five minutes."
I'm not sure that's how this works, I said, taking another bite of my salad, savoring the chicken and moral superiority. I turned to the bartender and said, Could I have a little more Caesar dressing, please, Kurt?
"A-ha!" thundered Karl, plonking his lunchtime beer onto the bar. "That dressing is sure to take a few minutes off your life."
Meh, I said. The study showed that most condiments would only take a minute or two off your life. Besides, I don't know if I want to prolong a life that doesn't have salad dressing in it.
"Yeah, but you just lopped off a full hour with that much dressing."
It's only a couple ounces, not the whole bottling plant. You're getting paranoid as your life draws to a close.
Karl flipped his middle finger at me even as he took a drink of beer. "So what's gotten into you, Kid? Why the salad at all. You usually get a burger at lunch, and that only takes off six minutes."
Well, your daughter called my wife and shared the hot dog story with her. So now I have to eat more salads each week. And she made me promise to eat salad today for lunch.
Karl guffawed. "Serves you right!" he cackled. "Ever since your wife took Alexis to yoga class, I have to do morning stretches before breakfast."
It's not so bad, I said. Last week, I had a taco salad with extra taco meat. Two days ago, it was a chef's salad with bacon. And tomorrow, I'm thinking about an egg salad sandwich.
"That's not salad!"
True, but eggs only knock off a couple minutes of your life, so I figure I should be fine, especially if I eat a peanut butter and jam sandwich later. That'll add another 34 or so minutes. A couple of those every day, and I've racked up 340 minutes, which means weekend hot dog party!
"Wait, what? I could be having PB and J's for breakfast? Hell, two of those every day, and I could eat two hot dogs for lunch and strike a delicate balance."
Anything's better than oatmeal. I made a face.
"Oh, it's not so bad," said Karl. "I just add in a little honey or maple syrup when Alexis isn't looking. Sometimes I'll dump in a little ice cream, and it's pretty good."
I really don't think that's how this works, I said.
"Seriously though, I'm getting tired of oatmeal. If she keeps making me eat it, I'm going to step in front of a bus and see if the oatmeal protects me."
You know, I said, the study said desserts only take off a couple minutes, so I may have some sugar cream pie.
"No!" Kurt half-yelled. "Alexis has banned me from desserts until I lose 20 pounds."
That sounds like a you problem, I said. With my salad, I'm already ten minutes to the good."
"I'll tell your wife if you do!"
I glared at Karl. Finish your lunch, or you'll miss your bus.