on October 29, 2021
A British woman thinks her boyfriend may have dumped her after discussing their relationship on the British show "This Morning." At the very least, he's been rather cold to her and hasn't said a word. She also hasn't seen him for a few days.
She's not actually sure he left, though, because — yep, you guessed it — he's a ghost.
(Regular readers of this column know I'm a sucker for a good dead ghost-alive human relationship story.)
Brocarde, a singer-songwriter who only goes by the one name, said she had been in a romantic relationship with Edwardo, a Victorian soldier who died at age 35 by falling down a well.
They seemed to have the ideal dead ghost-alive human relationship: He would disappear for a few days and return whenever she needed him. And then disappear again.
Other times, Brocarde would fix them a candlelight dinner and eat all the food while he sat and watched her, enjoying it the only way watching someone eat real food when you haven't eaten in 200 years can. 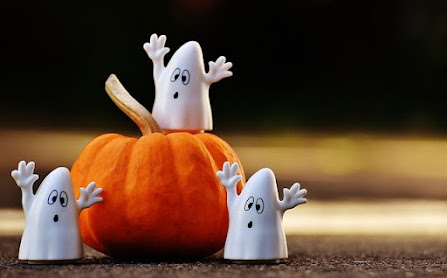 Edwardo would also let Brocarde know that he was there by making the candle flicker in a way that no light breeze from an air duct ever could.
Other times, if he got angry, like when she ever asked Edwardo to prove himself, he would blow the candle out.
"When I try to relight it, it won't ignite," she said in an October 11 interview on the LADbible website. Then Edwardo would disappear — well, disappear further.
But eventually, he would forgive her: "Days later, I'll notice love hearts in the steam on the shower," she said.
Edwardo did get a little jealous, though.
Brocarde said she was once writing a song about another man, and Edwardo smudged her writing and crumpled her paper. Other times, if she were preparing for a date, he would smudge her lipstick.
Except now, this relationship seems to be as dead as, well, half the people in it.
A couple weeks ago, Brocarde appeared on This Morning and talked about some of the intimate details of her relationship with her unseen boo — sorry, beau. Afterward, Edwardo was angry with her and had been giving her the cold shoulder for the last few days.
"Edwardo seems furious with me since I've gone public with our romance — he's gone completely cold," she told The Mirror (official motto: "Oh my God, is that a zit?!")
Brocarde says she normally feels a warmth when Edwardo is around, but now there's only a cold breeze that follows her.
"He's costing me a fortune in heating, even with a fire roaring and the thermostat on full blast. It's like the Antarctic," she told The Mirror. "I've had to resort to sleeping in a ski suit and a bobble hat and when he touches me it feels like shards of ice piercing my soul."
She now says there's an "unsettling vibe. . . like death" around the house.
"Maybe I'm just dead to him," she added.
Oh, haha! I get it! Because he's actually dead, and he's acting like it's really their love that's — oh, man, that's good stuff.
But it wasn't the chilly reception he was giving her that made her suspect they were through. It was the words "I'm Gone" written in steam on the shower door the night of the ITV interview.
"I truly feel like I'm being ghosted by a ghost," said Brocarde, beating the rest of you to the joke you were about to leave on my Facebook feed.
Except he's not actually gone, is he? If he were gone, your house wouldn't be cold, and your candles wouldn't be flickering out. And it wouldn't feel like icy shards when he touches you. But what do I know? I only feel icy shards when my still-alive wife sticks her cold feet on me.
If anything, Edwardo is still hanging around and emotionally tormenting her. In fact, he seems to have become physically aggressive as well.
She said, "I can sense his anger. I've felt myself being pushed across the room and he's pushed me to the floor on one occasion. I've tried to communicate with him via candlelight but he no longer flickers the flame — it just blows out."
But despite all this heinous crap Edwardo has put her through over the last few days, she doesn't regret sharing her relationship with the world.
"I don't think any man should control your emotions or decisions, even a ghost," she said.
I don't think Edwardo is that smart. Let's just say that a guy who dies falling down a well probably isn't the brightest disembodied light in the haunted house.
And he's definitely not a good person.
Also, he's not a person. Blow out all your candles, sprinkle some holy water around the house, take a hot shower, and write "f--- off" in the steam. Wash that manifestation right out of your hair.