Choices Have Consequences for Drunk People, Too

on October 08, 2021
It's 2:00 AM on a warm summer night. You're at the public entrance to a beach, and there's a sign that says, "WARNING: Shark sighted today. Do not swim." There's even a fence blocking your way. Clearly, the beach is closed, and you're not supposed to go in there.
You say, "Pish-tosh. That sign was put there by shark experts. What the hell do they know?"
"Yeah and they rushed putting that sign up," says your friend. "Did they even do proper research to see if sharks were even dangerous? There's only a one in 3.7 million chance we'd be attacked."
You and your friend have been drinking heavily, and you're not thinking clearly. So you climb the fence and go for a swim where you're both promptly bitten by a shark that doesn't understand probability theory.
You holler for help until you're rescued and your wounds are treated. Neither of you will be able to work, let alone walk, for several weeks. What do you do?
Do you accept personal responsibility for your actions, recognizing that while alcohol-impaired your judgment, you did make your own choices?
Do you blame the shark for wrecking what was just supposed to be a little harmless fun on your part?
Or do you threaten a lawsuit because no one explained the dangers of swimming in shark-infested waters while the beach was closed?
Now, imagine that same scenario, but instead of a shark-infested beach, it's a waterpark. And instead of swimming in the water, you go down one of the waterslides.
Now, whose fault is it? Who bears the responsibility for your injuries?
If you're a normal adult, you accept personal responsibility because you fell victim to circumstances of your own making. "Hoist with his own petard," as Mr. Shakespeare says.
(Actually, if you were a normal adult, we wouldn't be having this conversation at all.)
But you're not a normal adult, which means your story is in the news, which means someone was injured and is suing over their own stupidity.
Like Claire Vickers and Barry Douglas of the UK. 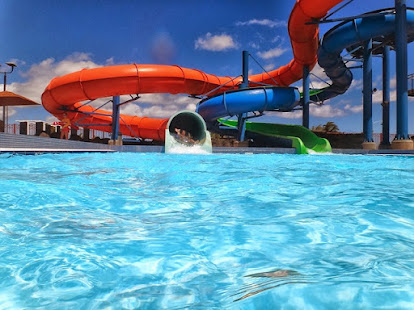 Last month, Vickers, 46, and Douglas, 44, got drunk and crawled under a fence at the Aldershot Lido waterpark in Hampshire, England, roughly 40 miles southwest of London. They decided to try one of the water slides, so Douglas stripped off all his clothes and sat behind Vickers, and the two raced to the bottom.
Where they were horrified to see a steel gate in front of the end of the slide.
They each broke a shin, and Vickers shattered one ankle, and Douglas shattered both. He'll now be using a wheelchair for several months.
As Vickers pounded on the slide and screamed for help, Douglas was curled up in the fetal position and was unconscious for two hours. The police finally arrived, and the two were taken to a hospital and treated for their injuries but were never charged with a crime.
Vickers and Douglas now blame the Lido's lack of security for their injuries and believe they should be compensated for what could be a two-year recovery time.
"That night I didn't plan on going out to do this, it just happened," Vickers said on This Morning, the British morning show.. "(I)t has happened before to other people, so I just think something should be done about it."
Something like putting up a fence to keep people out?
Douglas also said the chains on the stairs weren't even locked.
Wait, so the single chain across the stairs wasn't locked? Would that have stopped you?
BARRY: Oh, no, Claire. There is a chain across the stairs.
CLAIRE: No matter. No chain can stop us from our drunken mischief!
BARRY: But, Claire. The chain is locked.
CLAIRE: Oh, no, Barry. It looks like our boozy fun must end here.
Douglas told This Morning, "They should have security there. The fence should be secured, legal action has been taken."
You mean the fence you crawled under? That should be secured? It's a fence, Captain Hobbles. A fence is a sign that you're not supposed to go in there, or something is not supposed to get out. A fence sends a message that you're not supposed to climb it or crawl under it. And that you do so at your own risk.
This Morning host Phillip Schofield pointed out the obvious flaw in their argument: "It's tricky as you shouldn't have been there in the first place. You haven't been prosecuted, which you're lucky about. . ."
But Claire wasn't willing to accept responsibility for her choices. She replied, "Everybody makes a mistake, everybody has got drunk at some point in their life and made a silly choice and that's what this was."
True, but when people get drunk and make a silly choice, they still face the consequences for their actions.
Or can the waterpark people say they made a mistake by not electrifying their fence? Or forgot to put a lock on the chain across the stairs? Does this mean they're not to blame?
Or is it actually something else Vickers said during the This Morning interview?
She told the hosts, "We're idiots."
Ah, now we're getting to the bottom of things.
Sorry, too soon?