How to Escape a Meeting in the 21st Century

on October 15, 2021
Nothing is a bigger time waster than company meetings. Nothing productive gets done, the meeting agenda will grow to fill the time allotted, and we could have just handled most of the details with a simple email in the first place.
When the pandemic started, we quickly figured out that most meetings fit that bill, and companies began cutting back on their meetings after realizing they were boring and stupid.
That is until middle managers — who were beginning to weaken after not being able to feed on the anguish and despair of groups of people in one-hour increments — discovered Zoom as a way to start meeting online.
Back before the pandemic, getting out of a meeting was easy.
Like lying. "No, I can't make it to your meeting."
Or telling the truth. "No, I don't want to go to your meeting."
Fifteen years ago, I discovered a different way to get out of meetings that involved not so much lying as — okay, it involved lying.
I used to be the crisis communication director for the Indiana State Department of Health, which meant I dealt with the media if there was ever a public health emergency. And we regularly trained for pandemics just like the one we're going through right now.
We also had a lot of meetings with different committees and departments. I could finish one meeting, sit around the conference room, and pretty soon, people in my next meeting would show up. Some days, two-thirds of the people from my first meeting were in the second meeting too.
Back then, we didn't have smartphones, we had BlackBerrys. (The handheld device, not the tasty fruit.) You had to be at the director level or higher to warrant a BlackBerry, so we wore them on our belts like a status symbol. If you didn't wear it on your belt, you carried it in your hand so people could see you had a BlackBerry.
You never, ever put a BlackBerry in your pocket because then people wouldn't know how important you were.
BlackBerrys were used to answer emails, texts, and phone calls, and they would beep or ring regularly. However, it was extremely rude if your BlackBerry ever beeped during a meeting.
You could get away with one time, but a second beep was a gross lack of etiquette on your part. So we all just kept our phones on the High vibrate setting and wore them on our belts so we could feel it when we got a new message.
For six months after I left that job, I would still feel a phantom buzz on my waist from time to time.
You could always spot the emergency responders in a meeting because we were the ones who jumped every time our phone buzzed. When it happened, the person would check their BlackBerry, tap out a quick response, and then clip it back to their belt.
Occasionally, I would be sitting in a meeting, praying for a quick-but-painless meteor strike, when my BlackBerry would buzz. It would be an email that needed an immediate response, so I would excuse myself with a hasty "I've got to deal with this." Since I was the crisis communications guy, no one ever questioned whether I should leave or not.
The first time it ever happened, I dealt with the issue in five minutes.
And returned for the last 40 minutes of the meeting!
I sat there, mentally kicking myself the entire time, because not only was the meeting stupid, I was even stupider for going back for the rest of it.
From then on, if an emergency pulled me out of a meeting, I would deal with it and then never go back. I'd take an early lunch, get coffee around the corner, or just hide in my cubicle and not tell anyone where I was.
And yes, there were times where I only pretended that my BlackBerry buzzed and then played hooky from the meeting.
Now that I own my own business, I don't have to go to any meetings I don't want to. I can just sit and work. But for other people, home life is loud and smelly and regularly disrupts their day.
The only way they can get anything done is to actually be in a meeting.
But if you can't be in a real meeting, you can join a fake one instead.
A fake meeting is where you pretend to be on a Zoom call with your headphones on, staring at your computer while your family leaves you alone.
But you don't need to get your friends to help you out. Just search YouTube for the word "meeting," to find some fake meetings to watch. 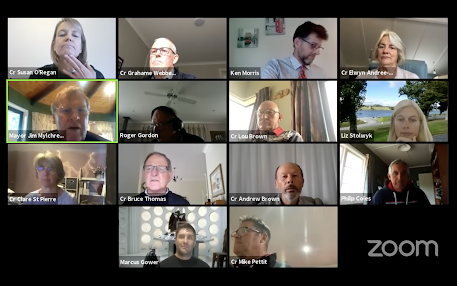 The number one recorded meeting on YouTube is a Zoom meeting of the Finance & Corporate Committee of the Waipa District Council in New Zealand. If you go to my website, you can click the link and watch it. To date, it has been viewed 397,910 times.
For those of you who are stuck in actual Zoom meetings and are low-key praying for a quick-but-painless meteor strike, there are ways you can escape real Zoom meetings or at least make it look like you're still there.
For one thing, rename yourself to "Loading. . ." and turn off your camera. Everyone will just assume you're having trouble logging in.
Or record a 10 – 15 second video of yourself sitting perfectly still at your computer. Set that as a video backdrop, and then step away from your computer.
Or there's software online that will let you fake background noises like a ringing doorbell, barking dogs, or a crying baby.
Not me, though. I'm still sticking with my "Oops, my BlackBerry" trick, and you know what? I don't get invited to nearly as many meetings as I used to.