Would You Marry Someone You've Never Met?

on November 26, 2021
Imagine getting married without ever meeting your new spouse face-to-face. I'm not talking about some medieval marriage between two rival kings who marry their kids off to prevent a war. And this isn't some new reality show, Married Without Meeting.
I'm talking specifically about Ayse and Darrin, two crazy kids from the United Kingdom and the United States who married this past August but still haven't met each other in person.
This unusual situation started, as most things do, during the pandemic. Ayse, a university student in Lancaster, England, joined a Facebook group to find a new pen pal while she was in lockdown. She hoped that finding someone new to speak with would alleviate her boredom.
Ayse met a woman from Michigan, Kenda, who had a son, Darrin, close to Ayse's age. She shared Darrin's contact information with Ayse, and the two began chatting in July 2020. They soon became fast friends and talked on the phone every single night using a mobile app that let them talk for free.
Soon, they began dating virtually, ordering takeout food for each other, and arranging to have treats sent to surprise each other. 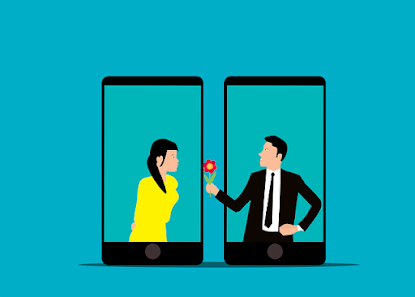 Because of the five-hour time difference, Ayse was falling asleep at 2 AM, but she was happy to do it. She had been furloughed from her job, so she adapted her sleep pattern so she could sleep at the same time Darrin did.
"Hi, it's Clippy! It looks like you're trying to watch your boyfriend sleep. Would you like me to draw a fake mustache on him?"
"We'd be on video call and just be chatting when we fall asleep. Then usually when I wake up, he's still there sleeping," Ayse told the Liverpool Echo (Official motto: "Official motto."). "It's the closest we can get and might sound strange, but it's a huge comfort."
Ayse would wake up the next morning, and Darrin would still be there, fast asleep, mouth agape, snoring like a water buffalo. Good thing no one has created a morning breath app.
Last November, Darrin asked Ayse to be his girlfriend, and the two continued to make smooshy-wooshy talk until this past May when Darrin proposed during one of their video calls.
"Hi, it's Clippy! It looks like you're trying to have a tender moment. Would you like me to — Oh! Oh, my! You guys! Congratulations!"
Darrin even spoke to Ayse's father beforehand to ask his permission before he proposed to Ayse.
"Hi, it's Clippy! You look like you're about to pee your pants with fear. Do you need me to find the nearest bathroom?"
Since they knew it would take a long time before they could actually meet face-to-face for the first time, they decided to get married via Zoom, electronically tying the knot in a legal ceremony officiated in Utah.
I've written about past marriages between dead ghosts and live women that took place on boats more than 10 miles out to sea, putting them in international waters where such "marriages" were considered legal. Or at least far enough from England for the craziness to not be contagious.
But this is the first time I've ever written about a marriage that took place via the Internet.
"I never imagined this would happen to me in a million years. But we're married, and it's all completely legal and official – I still can't believe it," Ayse told the Liverpool Echo. ("Ayse told the Liverpool Echo.")
Neither can I. I've heard of people falling in love over the phone or via a years-long letter-writing campaign, but this is a first.
I mean, Elizabeth Barrett and Robert Browning wrote 573 letters to each other and fell in love. The two famed poets were secretly married in 1846 at a UPS store.
But things are different 175 years later. Now people can meet on a Facebook group, chat on a mobile app, and get married on a video chat. Who needs to send 573 love letters when you can express your love to your significant other with over 3,600 emojis?
This year, Ayse tried to travel to the U.S. and meet Darrin in real life. She flew to Mexico for 15 days and then took a flight to Detroit. But she was turned away at U.S. immigration because immigration officials said she didn't have enough money to support herself during her stay. They sent her back on the next flight, and she was never allowed to actually see her then-boyfriend.
"It was so heart-breaking to be so close to him in the same city, but not be allowed through the border. I was put on the next flight home and cried the whole way back," she told the Echo ("she told the Echo").
The couple hoped to get married when they met for the first time, but they read about a new law that made international virtual weddings legal in Utah, so they decided to do that instead.
They had their wedding on August 19 in an online ceremony and are now officially husband and wife.
So now Ayse is waiting for a new visa to book her new flight to the U.S. and finally meet her husband.
I wonder what the protocol is for meeting your new spouse for the first time. Do you shake hands, kiss, or just get straight to—
"Hi, this is Clippy! You look like you're desperately searching for a hotel room. Can I call you a cab?"

My new humor novel, Mackinac Island Nation, is finished and available on Amazon. You can get the Kindle version here or the paperback version here.
England love marriage romance
Location: Orlando, FL, USA