All I Want for Christmas is Murder

on December 03, 2021
Dear Santa,
How have you been? How was your year? Have you been able to relax, or have you been keeping busy? It's been a crazy and hectic year for us here in the United States, as you probably know. I'll bet your Naughty list got a lot longer, especially around January 6, which should make things a whole lot easier for you.
I have tried really hard to be good this year. I didn't get into too many arguments on Facebook — okay, okay, maybe some. But not as much as I did in the past, so I figure that should count for something.
Also, I don't think it's fair to count those things I posted that other people fought about. I only did that to get people to have thoughtful discussions. It's not my fault that they let their emotions run away with them.
Still, I hope you look at my general trends for the year rather than focusing so much on individual days.
I had a few ideas that I wanted to run by you for Christmas. And not to sound like a choosy beggar, there were a couple things I wanted you to avoid this year too. 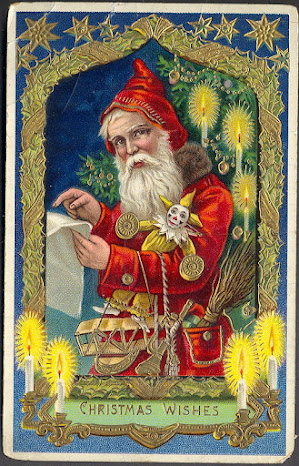 For starters, I don't need any socks. Ever since my grandmother gave me a pair of tube socks for my 10th birthday, I've just soured on the whole idea of socks as gifts. Also, I haven't worn tube socks since 1989, so I just don't need them.
Now I buy the same brand and color of ankle socks, so I never have to worry about matching them. If I lose one, that means I now have a backup sock for another pair.
Also, please don't bring candy for my family. It's not that they don't want it or that no one should have it. They just don't share with me, which I think is unfair. I would be totally willing to share candy with my family if they knew where I hid it.
Also, my wife says I shouldn't have candy because it's not good for me. At least that's what she says when I sneak some of hers. Or the kids'.
Now, onto the gift ideas.
First, I would like a loaf of Stollen, the German Christmas fruit bread made with nuts, spices, and candied fruit.
This way, when I share it with my friends, they'll ask me, "Is this Stollen?"
And I'll say, "No, Santa gave it to me."
Sorry, Santa, not every joke is a winner.
Next, I would like books. Plenty of books. Plenty of mystery books. Especially British murder mystery books. Ooh, that's it! I would like some British murder mystery books.
There's just something so comforting about British people murdering each other. It's very entertaining.
Sorry, I just realized how ghoulish that sounds, especially at Christmas. I don't mean to sound so bloodthirsty.
I meant to say there's something comforting in READING ABOUT British people murdering each other. Reading about it is very entertaining.
There, that's way less terrible.
Ooh, speaking of which, I would love a subscription to Britbox, the British TV streaming service. They have loads and loads of British murder mysteries so I can watch countless TV shows about British people murd—you know what? I'll just stop right there. Can I please have a subscription to Britbox? End of sentence.
My wife said I should ask for an electric toothbrush to clean my teeth after all the candy I've been stealing, but I have no idea what she's talking about.
I would also like a 10" Amazon Kindle Fire with 32 GB of memory. I currently have the 7" model, but the screen seems to be shrinking, and I have to hold it closer to my face. I realize I can make the text bigger, but then there are fewer words on the screen, and I have to keep "turning the page," which makes my wrist tired, which is why I need the electric toothbrush.
Plus, the 10" model will have a bigger screen that I can watch my Britbox subscription on.
And if you're going to give me an electric toothbrush, then I would like some candy. Forget what I said earlier. I would love a big bag of hard candy of assorted exotic flavors. Passion fruit and vodka? Yes. Mango and tequila? Also yes. Rum and Coke? Ooh, yes, please. Are you sensing a theme here?
Booze candy is what I'm saying. I would like booze-soaked candy, or booze-infused candy, or even a big bag of gummy bears and a bottle of Sailor Jerry, and I'll make it myself.
But please hide everything in a cereal box that's labeled Bran & Sadness Flakes, so everyone will think it's just "Dad's cereal," and they'll leave it alone. Because they sometimes sneak my candy.
I don't know where they get that from.