Do You Even Have a Favorite Dinosaur, Bro?

on December 10, 2021
What's your favorite dinosaur? I think everyone should have one, and I don't quite trust people who don't.
Mine is the ankylosaurus, the one with the spiky armor on its back and the heavy ball at the end of its tail.
The problem is, we've had our childhoods and childishness drummed out of us, and no one talks about dinosaurs unless it's their job.
Not having a favorite dinosaur has made many people tedious and dull.
We're not supposed to have favorite dinosaurs. Or like cartoons. Or eat sugared cereal. Or get excited when a restaurant has tater tots. Basically, we're not supposed to enjoy the things we loved as a child.
I've found that people who believe this are some of the bleakest, most cheerless individuals to shuffle through life. They try to infect other people with their "life is to be endured, not enjoyed" philosophy, sucking happiness out of the people around them, like joy vampires.
"When I was a child, I spoke as a child, I understood as a child, I thought as a child: but when I became a man, I put away childish things," wrote the Apostle Paul.
And waited for the icy hand of death, apparently. Turn down the Gloom-o-meter, Captain Bringdown.
Who made up these rules that said what we're "supposed to" do now that we're adults? Who decided that you can't enjoy cartoons? Who decided that sugared cereal is only to be enjoyed by 8-year-olds?
For me, it was my middle school teachers. When we hit the 7th grade, they started beating the drums of growing up and no longer liking the things of our childhood. But they were a gray, cheerless lot who looked like they hadn't had a moment of pure joy since they were eight, right before learning that old Jack the bulldog wouldn't be making the trip out west with them.
I recently asked a friend what his favorite dinosaur was, and he was caught off-guard, which made me suspicious: This is the sort of thing you should know off the top of your head.
He thought about it as if he was trying to dredge up a far-off memory, but we both knew he was just trying to remember the ones from Jurassic Park.
The fact that I asked him as he was setting up for a music gig might have had something to do with it, but still, you should know this as readily as you know your dog's name.
Finally, he just blurted out, "Tyrannosaurus Rex."
"T-Rex?" I hollered. "What are you, five?" But he was already out the door to get the rest of his gear.
Seriously, T-Rex? I mean, that's great for the little kid in all of us, but as you get older, your tastes should evolve, and you should understand some of the subtle nuances about dinosaurs. I'm surprised he didn't just say Indominus Rex., the lab-grown dinosaur from Jurassic World. 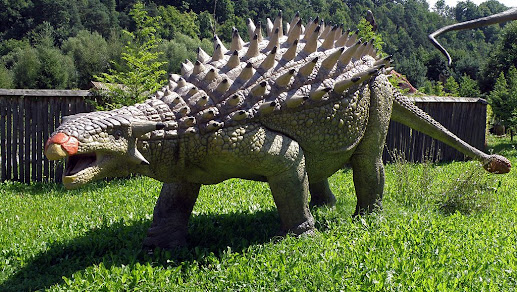 I can't get too frosty, though. Four years ago, my younger daughter corrected my pronunciation of ankylosaurus.
"It's ann-KAI-lo-saurus," she said.
"What? No, it's not! It's not ankle-o-SAU-rus?" I said.
"Nope. Ann-KAI-lo-saurus." And she showed me a paleontology website that ruined everything.
"But I've been calling it ankle-o-SAU-rus for nearly 45 years! I built my entire dinosaur childhood around this one fact! And now you're telling me I've been believing this ankle-o-nonsense for nearly five decades? Has my whole life been a lie?"
I called and asked my dad about it, and he said, "Erik who?"
My second favorite dinosaur is stegosaurus, the one with the upright plates down his back and spikes on his tail.
The spikes are unofficially-officially called the "thagomizer," so named after Gary Larson in a Far Side cartoon. In the cartoon, a caveman is showing a slide to other cavemen and says this part of the tail is named "after the late Thag Simmons."
The term was adopted by the Smithsonian Institution, the Dinosaur National Monument, the book The Complete Dinosaur, and the BBC documentary Planet Dinosaur.
So now who's the nerd?
I asked my Facebook friends if they had a favorite dinosaur. One said, "We're supposed to have a favorite?" Another named one from a cartoon movie. And a third said this sounded like an identity theft question. Several others posted humorous answers of their own, but almost no one had a proper response.
I felt bad for them. How do you go through life without a favorite dinosaur? Or a favorite bird? (Penguins.) Or a favorite superhero? (Wolverine.) Or a favorite sugared cereal? (Cap'n Crunch. Plain, then Peanut Butter.)
One person said her favorite was T-Rex, and she put up a gif of a T-Rex, so I supported her choice. She had clearly put some thought into it and backed it up with a full-motion graphic, so I felt bad about calling that other guy a five-year-old earlier.
The fact that he had to think about it, though? I'm going to keep a closer eye on him.