What are the Odds of Slipping on a Banana Peel?

on December 17, 2021
I've been fairly lucky over the last couple of months.
In November, I won a Freewrite smart typewriter, which is like a laptop without a regular-sized screen, just a small window that lets you see what you've been typing. There were thousands of entries, and I won! Making this the coolest thing I've ever won.
Two weeks ago, I won a book from one of my favorite authors as part of a giveaway on Goodreads. The odds were roughly one in 2,500 that I would win.
And then last week, I won another book in another Goodreads contest with roughly the same odds.
Speaking as a guy who can't even get four quarters from a change machine every time, this was highly unusual for me. I entered three giveaways, and I won three times. What are the odds of that happening?
If I had paid more attention in math class, I could probably tell you. And after consulting several math websites, I discovered the answer is "a lot."
I should have bought a Powerball ticket.
After that incredible run, I'm worried that the same staggering odds will work against me. Like, I'm going to have a reversal of fortune and die from something extremely unlikely to kill me.
Living in Florida, there is a combination of four things likely to kill me that won't happen elsewhere: Gators, sharks, snakes, and bears.
(I'm not going to say, "Oh, my!")
According to a YouTube video by Reigarw Comparisons, I have a 1 in 8 million chance of being killed by a shark, 1 in 3 million chance by an alligator, 1 in 500,000 chance of death by snake bite, and 1 in 2.1 million chance of being killed by a bear. (We have black bears in Florida, including roughly 4,000 in my county. So yes, it's a possibility.)
Reigarw Comparisons makes comparison videos based on statistics of certain phenomena, such as cars' horsepower, deadliest animals, or my personal favorite, cartoon flamethrowers.
Despite the very unlikely nature of these attacks, I can work the odds in my favor.
If I never go in the ocean anymore, I can never be killed by a shark. But I'm more likely to be killed by slipping on a banana peel: 1 in 3.5 billion. Thanks to the 1970s shark documentary, Jaws, I never go into the ocean past my knees, and even then, it's only once every few years.
So if I stay out of the ocean for the rest of my life, I'll eliminate my shark death risk.
But the banana peel thing still hangs over my head like the Sword of Damocles. 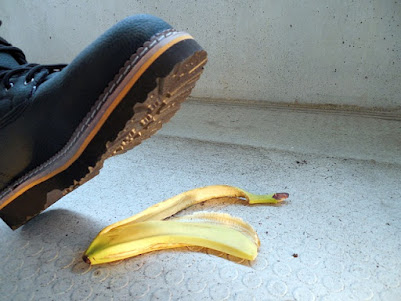 I may have a strict no-sharks-in-the-house rule, but I still eat bananas pretty regularly. Which means I'm at a bigger risk for dying by slipping on a banana peel.
Two people died that way in the 20th century: Once in 1917 and another in 1927. The 1917 case was a chauffeur in Brooklyn; the 1927 case was a 74-year-old man in Tennessee.
But bananas aren't the only dangerous fruit. Orange peels can be pretty hazardous, too.
Bobby Leach, the second man to ever go over Niagara Falls in a barrel, actually died from slipping on an orange peel in 1926.
He slipped on it while on a publicity tour in New Zealand and broke his leg. The leg got infected, got gangrene, and doctors amputated it. He died two months later of complications.
Which puts bananas ahead of oranges in human-killing, 2 – 1. Apples are still trying to get on the board, clocking in at 0 deaths.
I also eat oranges, but I couldn't find any death statistics about them, so I'm safe there.
A vending machine could also kill me. Those odds are 1 in 125-million, and they increase if I kick the machine. I don't know the odds of dying by eating what's in the vending machine.
I do have a 1 in 3,140 chance of dying from choking, so if I died choking on a vending machine candy bar, does that mean I get a 2-for-1 special? Did I somehow win the jackpot?
Probably not, because the odds of winning the Powerball jackpot are roughly 1 in 292 million. According to Reigarw Comparisons, I'm twice as likely to be killed by a vending machine than winning the Powerball.
Still, with the good luck that I've had with my Freewrite and two books, maybe I should take a chance and buy a ticket. If I buy two tickets, I could cut my odds in half and increase my chances.
Except I could be killed by a falling tree on the way to buying the ticket. The odds are one in 400,000 of being killed by a falling tree, and that number gets smaller if you're in a hurricane.
Still, there's a Powerball vending machine inside the snake house at Gatorland in Orlando, next to the banana stand under the big oak tree. I can just zip in, buy my tickets, and zip back out.
I like my odds.

My new humor novel, Mackinac Island Nation, is finished and available on Amazon. You can get the Kindle version here or the paperback version here.
death odds sharks snakes
Location: Orlando, FL, USA