Soup Is Not a Meal: How Soup Hurt Me When I was a Kid

on March 04, 2022
I'm not a big fan of soup.
I mean, it tastes good, and I enjoy eating it, especially a creamy soup, but I would never think of ordering soup as a meal.
Because soup is not a meal.
At best, it's an appetizer. Or a light snack, something to eat when my mouth is bored. Or maybe part of a larger meal, like grilled cheese sandwiches and tomato soup.
But it's not a meal unto itself. That's just cruel.
Before anyone points out that this was a whole episode of Seinfeld in the '90s, yes, I know. I didn't watch much Seinfeld, but I saw that episode.
And that one, too. Oh, and also that one. Yes, it was very funny. I liked it when Jerry made that joke about that thing.
You could persuade me that a creamy soup is a meal, but I need at least two bowls to feel full. Otherwise, regular soup just isn't up to the task. In fact, according to a recent survey, only 45% of all Americans think soup is hearty enough to count as a meal.
But it's not. It's chunky broth. Or, as one friend put it, "It's hot water with chunks of [crap] in it."
Another friend says it's a meal, "especially if your momma makes it." But he also said he thinks a piece of bread, cheese, and water is a meal.
Look, you can swallow a fly at 6 PM, but that doesn't make it dinner. Soup isn't a meal unless it's thick and creamy. You shouldn't be able to drink it from a mug like a cup of chicken tea. 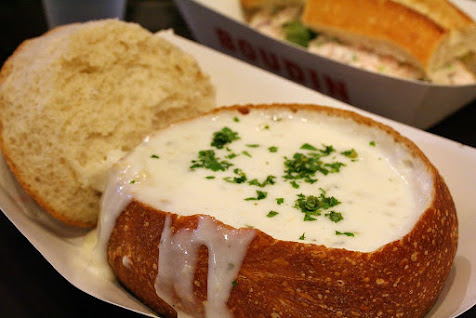 You may ask, what about ham and pea soup? Clam chowder? Creamy chicken and broccoli? Yes, those are soups! They fill me up and get in all the nooks and crannies, so I stay full for hours.
I love a good clam chowder. But a bowl of broth and veggies just can't hack it. You're lying to yourself if you think so.
Like every other kid in America, I grew up eating soup from a can. In fact, it was the first thing I ever cooked. I was six years old, and my best friend, Doug, was over. My mom said I could make us lunch, so we decided on soup and baloney sandwiches.
(This was Indiana in the 1970s, so we ate baloney, not bologna.)
I opened the can of Campbell's Chicken Noodle, dumped it in the pot, filled the can with water, and dumped that into the pot.
And then, because there were two of us, I filled and dumped the can a second time.
"This doesn't taste very good. It's really watery," said my former best friend, Doug.
"How many cans of water did you put in?" my mom asked.
"Two, because there's two of us," I said.
"Oh, no. If you want more soup, you just put in another can of soup and one water." My mom fixed it by putting our soup back into the pot and adding another can, so everything balanced out.
That was a defining moment in my relationship with soup, except my soup wounds go much further back to when I was four.
My mom made chicken noodle soup, a sandwich — because soup is not a meal — and orange juice for lunch one day. And me being a curious child, wondered what my soup would taste like with orange juice in it.
Terrible. It tastes terrible.
When I said I was done, my mom asked why I didn't eat my soup.
"It doesn't taste good."
"But you like chicken noodle. What's wrong with it?"
"It's just yucky today."
She tasted it. "What did you do to it?"
Oh, sure, blame the four-year-old! Who says I did it? It could have been kitchen ninjas, you don't know!
"I put some orange juice in it to see what it would taste like." What? Why did I say that? What about the kitchen ninjas?
"It tastes terrible," my mom said.
"I know," I said, happy she understood my problem. "That's why I don't want it. Can I have a new one?"
"Oh, no. We're not wasting food. You eat that."
I cried until it got cold. What sort of horrible, uncaring mother would make her own child face the consequences for his actions?
I choked down every sickly-sweet bite of the orange chicken noodle soup, tears running down my face, waiting for my mom to grant mercy before I died from orange juice poisoning.
She didn't, but I swore I would never eat chicken noodle soup and orange juice again. That'll show her!
I've had some rather hard feelings about soup ever since. I'm still not ready to forgive chicken noodle soup, and that bitterness has extended to all broth-based soups. There's nothing about them that I find redeeming or filling.
Don't get me wrong, I'll eat them. But there is no joy in my heart, no gladness upon my soul.
Unless there are grilled cheese sandwiches involved. Then I'll eat whatever you set in front of me.
Just hold the orange juice, though.