Town Council Slashes 1,000 Daffodils Because They Think Their Kids are Dumb

on April 08, 2022
British kids are dumb.
Or maybe just the kids from Cornwall.
They must be. Why else would officials at St. Blaise town council have cut down 1,000 daffodils in a local park?
Because the town council was worried that children would eat those daffodils.
Not that there is any evidence of kids eating daffodils. Not that there's a rash of daffodil poisonings among children. Not that the Daffodil Challenge is sweeping social media. None of that.
No, it's because the St. Blaise town council learned that daffodils are poisonous if they're eaten and can give kids diarrhea.
So can eating sugar, but no one is burning candy stores to the ground. Besides, kids already don't like eating vegetables. What makes you think they'll start grazing local parks and picking their own salads? 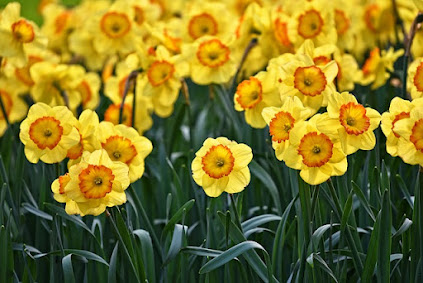 This town council, like every other mindless British town council, has put "health and safety" ahead of common sense and created a solution to a problem that never existed.
(Not that daffodils are deadly. A spokesman for the South West Health Protection Unit in Cornwall said that daffodils might be toxic, but most people recover without treatment.)
I'm willing to bet that in all the history in all of Cornwall, no child has ever gorged themselves sick on daffodils. We haven't had decades upon decades of Cornish children snacking on the spring flowers until the St. Baise council bravely stepped in and saved countless lives.
Wait, I said "countless." I meant zero.
So what made these bureaucrats decide, after all these decades, that daffodils were suddenly a public health menace?
According to the British tabloid Metro, a council spokesperson was able to stop banging two rocks together long enough to say, "Hurr hurr hurr hurr."
Actually, I'm paraphrasing. What the spokesperson said was, "After recent play inspection training, we were advised not to have daffodils in play areas as all parts of the daffodil can be poisonous."
As it turns out, the unnamed spokesperson was the reason for this rash decision. They said, "I brought this to the attention of the town council who said no more daffs should be planted, but those that were there before the land was devolved to us would stay."
To their credit, the town council agreed to one thing and did the complete opposite.
They said they wouldn't plant anymore and would just wait for the ones that were already there to die off.
Except they chopped them all down instead. In politics, this is called appreciating the nuances of a problem. In the real world, it's called lying.
A spokesman for Roselyon Play Park Committee told Metro, "Are they going to put signs up saying don't eat the daffodils next? There have always been daffs in the park. It used to be an old orchard and there must have been about 1,000 flowers."
I confess I'm not current on the habits of young children. Do they eat plants and flowers these days? This is not something I've ever heard of.
When I was a kid, none of us could be bothered to eat broccoli, let alone wildflowers. But Cornish children apparently don't get enough flowers in their diets, so they descend on the Old Roselyon Place playground like a plague of locusts and eat every daffodil in sight.
"I say, Nigel, this year's daffodils are especially crisp and only slightly bitter."
"Oh, absolutely, Penelope. I remember the 2020 planting. Those were especially bitter. I vomited and had the trots for two days."
"Worth it though!"
"Totally worth it, Nigel."
"Nothing beats those first crunchy daffodils of spring. I've been enjoying a sautéed daffodil stir fry with a glass of puddle water that mangy dog has been drinking from."
"That sounds lovely. I paired my daffodil sushi with whatever was in this half-full beer tin I found."
When I was a kid, my friends and I would play in the woods at the end of our street, and I'll admit that we would sometimes nibble on the three-leaf clovers we found
We knew those weren't poisonous, mostly because my friend's older brother used to do that, and he didn't die, so we knew we were safe.
We drew the line at anything else that came out of the ground. Instead, we rode our bikes to the local Village Pantry convenience store and loaded up on candy bars and Slushies. Because we weren't idiots.
I imagine most Cornish children are equally as bright and hopped up on sugar as we were back then. Because we had the sense not to eat things we didn't know anything about.
We're like dogs that way. Dogs know not to eat things that are poisonous.
Or, as one person told Metro, "Daffodils are also poisonous to dogs, even my mutt has the common sense not to eat them."
St. Blaise town council: Dumber than kids and dogs.