Your Favorite Candy Can Reveal Your Personality

on April 22, 2022
(Note: This is my 1,404th column, marking a full 27 years of being a newspaper humor columnist for Indiana newspapers. In all my time, I have never missed a deadline.)
Hey, Karl, what's your favorite flavor of candy?

"What? What fresh nonsense are you shoveling today?"

I found a new study commissioned by the Jelly Belly candy company. It says you can tell a lot about a person's personality based on their favorite flavor of candy.

"Kid, why is it that you ask me to lunch whenever you're stuck for a column idea?" Karl asked, taking a bite from his smoked Gouda burger. We were at Klompen, our favorite Dutch-themed bar for lunch, and their burgers were some of the best in the city. 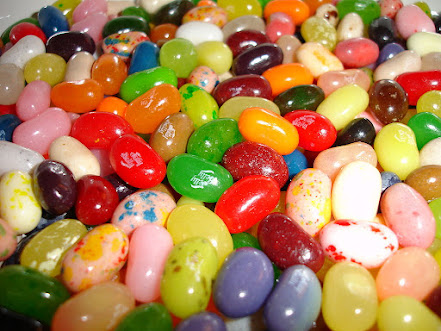 I don't know what you're talking about, I said, eating some of my pomme frites, which is Dutch for French fries.

"It's true," he said. "Whenever you can't think of a column topic that week, you look for some stupid study and invite me to lunch."

I'm guessing your favorite flavor of candy is crab. Or those little egg-shaped chocolate turds.

"What are you talking about?" Karl crammed another bite of hamburger into his gaping maw.

Because you're being an a-hole! I said. Only I didn't say "a-hole," I actually said a-hole.

And I've got a study about that, too, I continued, brandishing my phone. A study from the University of Georgia found that a-holes tend to be people who are not agreeable and angry. A-hole.

"Karl, please do not shout in the bar," said Nicolaas, the Dutch bartender. We were sitting at the bar like we usually do. It was late enough in the afternoon that no one else was in there, but Nicolaas liked people to be calm and relaxed.

See, I told you you were being an a-hole, I said. There was a study in the journal Collabra: Psychology—

"Oh, like you go around reading Collabra: Psychology in your free time," said Karl, a little quieter this time.

No, I have a news alert set for the word 'a-hole' so I can see if I need to bail you out of jail again.

Karl flipped his driving finger at me and took a drink of his beer. I ignored him.

I continued: The study said that the people most likely to be a-holes tend to be middle-aged men, and they tend to be aggressive and entitled.

"I can never keep track," said Karl. "My age seems to fly all over the place when you tell these stories. I think I'm still the same age as when we first met in 2006."

I ignored him. Anyway, the study says that people who are a-holes don't have any one specific behavior in common. They just tend to be disagreeable and angry. Which, given your reaction to my candy question, I would say you fit the bill. A-hole.

Karl grabbed my phone and scanned the article in question. "It also says here that a-holes tend to have anger management issues and hold bigoted opinions, which we both agree doesn't fit me at all."

Yeah, that's true, I admitted. But you were still a jerk to me about the candy question.

Karl sighed like a teenager who'd been asked how her day was. "Fine, what's the stupid candy question again? What's my favorite flavor? I would have to say that it's a tie between lemon and licorice."

OK, let's see. It says that almost 20% of Baby Boomers say licorice is their favorite, compared to just six percent of Generation Z.

I looked back at my phone. It also says that 69% of people who like lemon identify themselves as honest.

"What about me?" asked Nicolaas. "I like cherry and pear."

"That's true," said Nicolaas. "I have a Kooikerhondje that I named after the Dutch king, Wilhelm. I call him Willie."

Also, nearly 60% of pear jelly bean lovers would be considered eccentric, I said. As do 68% of cherry flavor fans.

"That means I'm 128% eccentric. I can accept those numbers," Nicolaas said proudly before striding off to refill my Coke.

Karl looked like he was about to correct him, but I just shook my head. Don't, I said. It makes him happy.

"So what are your favorite flavors?" Karl asked.

I like lemon and orange, I said. In addition to being more honest, 53% of sour candy lovers are more eccentric, 50% are funny, and 51% are sarcastic.

You're being an a-hole.