on May 20, 2022
While every newspaper strives for 100% correctness within its pages, it's not always possible. Everyone is human, including us, but we must maintain our reputation for accuracy. So we have a few corrections to issue in the spirit of truth and openness.
In our May 19 issue, we mistakenly said that Eleanor Hebert had been the secretary at First Baptist Church for 17 years. She has actually served them with distinction for 23 years. Congratulations, Eleanor. We apologize for the error.
We further apologize for identifying Mrs. Hebert as the armed bank robber who held up three banks before leading police on a three-state high-speed chase that ended in a six-hour armed standoff. According to police reports, the actual bank robber was Elmer Herbert, who was taken to the hospital after the final shootout.
Also, Mrs. Hebert is resting comfortably at home after being released from jail.
Her attorneys have requested a meeting with us the following week.
In that same issue, we inadvertently swapped some critical information between a couple of our display advertisements which caused some confusion among our readers. The ads should have read as follows: The Glory Road Church will be offering full-body baptisms this Sunday. And it's Nick's Tavern that's having two-for-one well shots on Friday. We deeply regret the confusion, although not as much as Nick's customers.
Two Saturdays ago, we reported the high school boys baseball team "got beaten like a couple of eggs and couldn't find their way home with a rope," and they were "utterly humiliated by a score of 11 – 2."
The score was actually 11 – 3. Good luck next game, boys. We believe in you. 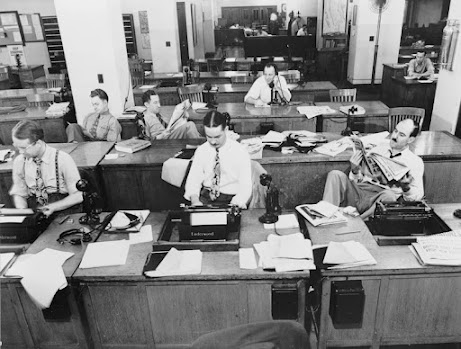 Recently, this paper mistakenly identified a sale at the local supermarket as a "moral travesty that stains the soul of this community." It should have read "Broccoli, $1.89 per pound."
On April 28, we misspelled the name of Marshall Higgenbotham as Marshy Hickeybottom. We regret the error, and the copyeditor in question — an old high school classmate of Marshall's — has been suspended pending a further investigation. Our deepest regrets to Mr. Hickeybottom.
During our story on the school board's attempt to ban books from the school library, we mistakenly identified one of the board members, Mr. Horace Macdonald, who has served on the school board for 14 years, as "a slug-brained, book-burning fascist who wouldn't recognize the First Amendment if it bit him on his Nazi-loving hindquarters."
His last name is actually spelled McDonald.
We regret the error.
Now for an arts correction from the late 1990s.
In 1997, Susie Taylor's performance as Stephanie Smith in "Run For Your Wife" was not "a delightful romp through the perils of bigamy," as we stated in our review at the time.
Frankly, it was a hot-garbage performance by an emotionally shallow 17-year-old who couldn't act her way out of a wet paper bag. We only wrote a positive review because her father threatened us with a lawsuit. But now, Mr. Big Shot is in prison for tax fraud, and we won't see him for another 12 to 25 years.
If there were an award for worst performance in a high school play, Susie Taylor would have gotten the lifetime achievement. I saw her last week when she came back to town for a visit and deliberately pretended not to know me. Oh, but I see you, Mrs. Taylor-Baxter. We all know you've had plenty of work done, so your rich, fat husband doesn't get tired of you.
If any readers purchased tickets to that overacted "cluster-truck" 25 years ago based on our review, please stop by the office, and we will provide you with two free tickets to this season's high school play. We apologize for the inconvenience.
Now onto science.
Our Debunking Myths With Science columnist, Dr. Gerald Schenck, sent us a message to pass along to our readers. Last month's column carried a misprint. The article should have stated that dropping a penny from the Empire State Building is not fatal. However, dropping your friend Penny is.
Both this paper and Dr. Schenck deeply regret the error and hope the Bissette family, as well as the rest of the junior class science trip students, can find peace over time.
Finally, in last Monday's issue, we reported that Congressman G. Galvin Gerard's campaign speech contained several exaggerations, half-truths, and outright lies and that he laughed uproariously when a little girl's balloon popped. The little girl was actually a little boy.
We deeply regret the error.

My new humor novel, Mackinac Island Nation, is finished and available on Amazon. You can get the Kindle version here or the paperback version here.
corrections errata newspapers
Location: Orlando, FL, USA