on June 03, 2022
"It's good enough for who it's for."
I've said that more than once as I've worked on building projects over the years, quoting the quip whenever I finish a small project. I first heard it 25 years ago when my father-in-law said it as he was working on a project.
It made me laugh, rather longer than one should for tired old phrases, but I had never heard it before, so I thought it was funny.
Now, it's like laughing at "working hard or hardly working?" or "hot enough for ya?"
To which you say, "Boy, they'll let anyone in here. How you doing, you old so-and-so?"
And you both guffaw and chortle, clutching your lapels, as the wind blows through your old-timey sideburns.
There are still people who laugh at that exchange, more out of tradition than anything else. So I've always stuck with "Good enough for who it's for" because it makes me smile.
I also said it because I was proud of the job I had done. I've gotten pretty good at building and fixing and woodworking, despite not learning any of that until I was about 30.
It gave me a double ego boost to say it: I had done a good job. And I deserved to have a good job done for me. So it was good enough for who it was for. I said it with pride.
But someone else popped my proud balloon because you can't not be happy, what with the Positivity Police in town.
"Don't say that," scolded a scold on scold-ial media. "It implies you're not important enough to have quality work. You need to believe in yourself."
This was actually the opposite of what I meant, but I stopped because they had ruined it for me. I knew what the saying originally meant, but I had my own reasons for saying it. And it certainly wasn't because "I'm a lowly worm who deserves shoddy workmanship." 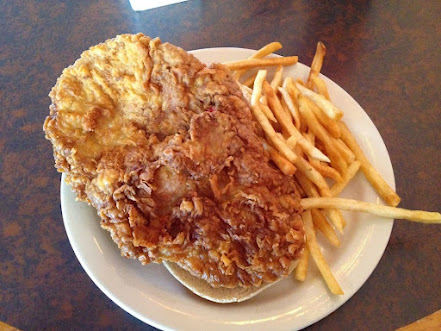 Besides, I'm from Indiana, where Good Enough is fine. It's Just Fine.
Indiana is a land of good enough and just fine. We don't need greatness. We don't need amazing. We're content and happy.
Oh, sure, we're happy when people like Peyton Manning or Hélio Castroneves come to Indiana and do great and amazing things. But they're from away, so we're happy to let them be great.
But we're not like California or New York. There, it's all about status: the most expensive car, the newest phone, the latest fashion, the biggest jewelry.
We're not like that. What we have is good enough. My last car ran 237,000 miles before she gave up the ghost. She got me from point A to point B just as fast as the expensive cars. The stereo was loud, and the AC kept me cool. What else did I need?
"Did you see my new car? It's got a 6-liter engine, turbo booster, carbon fiber doors, voice-activated sun roof, a 12-channel surround stereo, heads-up display, and rich Corinthian leather seats. It even has seat warmers."
"That's nice. Did you see my car? It has an engine and a steering wheel. I can play my podcasts on the radio, my oil changes don't cost $1,000, and I got here five minutes before you did."
See? Good enough.
This is different from Pretty Good. Pretty Good doesn't mean mostly good. It actually has two meanings, and one of them can be bad if you say it wrong.
It's all in the tone and pitch of how you say it. English is not a musical language, not like French. We follow our Germanic roots where everything is abrupt and emotionless.
So if you say Pretty Good one way or the other, it takes on a whole different meaning.
For example, say it in an ascending tone, where the "pre" starts on a lower note and "good is the higher note. That way means, "Hey, this is very, very good. I'm surprised at how good this is." When your partner makes dinner, you say, "This is pretty good," they're pleased because they know you like it.
(Just don't say it like you're shocked at how good it is. That can be pretty bad.)
Or you can say it in a descending tone, where the first syllable starts higher, and the last one ends lower. Like you're suspicious or trying not to lie. When you say it that way, it means, "This is the most disappointing thing I've ever done. I will be forever haunted by this moment, and my life will have no meaning."
At least that's what a waiter thought I meant once when I said that about the meal I had eaten in a small-town Indiana restaurant.
"That was Pretty Good," I said, using the descending tone.
"You didn't like it?" he said
"Oh, no no no! I thought it was great! It was amazing! The chef has outdone himself."
"Really?" he said, sounding even more disappointed.
"Oh, no. Sorry. It was Good Enough."
He couldn't have been happier.
Mostly because I tipped him 20 percent. Because there are times that Good Enough is not enough.

My new humor novel, Mackinac Island Nation, is finished and available on Amazon. You can get the Kindle version here or the paperback version here.
Helio Castroneves Indiana Peyton Manning