The Most Misspelled Words for Each State, 2022 Edition

on June 10, 2022
"Excited. E-X-C-I-T-E-D. Excited."
The Scripps National Spelling Bee has just concluded, which means Google released its annual "How do you spell. . ." state-by-state breakdown, and I couldn't be more excited.
I was in the spelling bee in fourth, fifth, and sixth grade. I won my classroom competition each year and finished runner-up in those first two years. In my third year, I went out early because I didn't actually hear what word the judge had said.
"Disappointed. D-I-S-A-P-P-O-I-N-T-E-D. Disappointed."
Even though I've become a professional writer, there are still a few words I have trouble spelling.
To my embarrassment, I always struggle with "embarrassed." Even now, I can never remember if it's one 'r' or two. I also used to have problems with "judgment." It took me years to stop spelling it "judgement."
These problems are easily solved with a spell checker, so it's only a little struggle.
Meanwhile, Georgia has a little struggle, which can be a big problem because "little" was their most misspelled word. 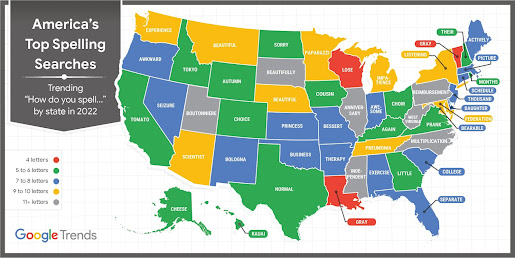 It's a good thing I'm a writer and not a mathematician because that's another word I can't spell right. I also have a lot in common with North Carolina; they had problems with "multiplication."
I was pretty good at multiplication, but my weakness was fractions. And decimals. And algebra. So, I see you, North Carolina. We're in this together.
Of course, if you can't do math, you can't be a "scientist." And neither can Arizona since that was their most misspelled word this year. You also need to go to college to be a scientist, except South Carolina had problems with "college." But that means they can be entrepreneurs since you don't need college to start your own business. Except "business" was Oklahoma's big struggle this year. (Surprisingly, no one struggled with "entrepreneur.")
Meanwhile, Vermont and Louisiana are talking some serious smack to the rest of the country, singing "We Are The Champions" night after night, because they'll never "lose." Or at least spell it right. But you don't need to spell it if you never do it. Just remember, "loose" means not tight, and "lose" means not winning.
Let's not forget New Hampshire, also up there in the north. They're having their own problems with the word "their." Or was it "there?" Or "they're?"
No, no, it was "their."
Rhode Island's struggle has been months. No, I don't mean it has gone on for months. It's literally "months." As in "we haven't seen the sun in months," since it doesn't really get warm there until June.
This year — once again — we have a state that can't spell its own name or one of its major features.
(As a quick aside, Kentucky can't spell "again," although it's the first time that's ever happened. Is that irony?)
Hawaii had problems with "Kauai," its fourth largest island, which is not entirely surprising. It's a "k" followed by four vowels, which also makes it my new start word on Wordle.
Meanwhile, West Virginia had problems spelling "West Virginia." That's because everyone there calls it "West By God Virginia," and Google is just not sure what to do with that.
Minnesota may be getting a little big for its britches because their word was "paparazzi." Seriously, this is such a big problem for you that you frequently have to spell it? Like, "OMG, you guys, I got mobbed by the paparazzi outside hockey practice." We're not buying it, Minnesota.
Kudos to Utah for classing it up this year. Their tough word was "boutonniere," which tells me it's prom season once again. Look, guys, just tuck a rose into your buttonhole and be done with it. It's easier to spell.
Except Vermont and Louisiana couldn't spell "lose," so maybe I shouldn't speak too soon.
Tennessee can't spell "pneumonia," Washington is flummoxed by "experience," and Michigan is having trouble with "impatience." My sister-in-law and her husband live there, so believe me, Michigan, I can totally relate.
My fellow Hoosiers must have been Googling me a lot because they struggled with the word "awesome." Of course, most people can't even spell my actual name right, so that's probably not what happened.
Maine had problems with "actively," and Alabama struggled with "exercise." I don't blame you. I hate actively exercising too. I'd rather eat "dessert," but Missouri can't, so I'm just going to have theirs.
Speaking of food, New Mexico can't spell "bologna," California can't spell "tomato," Alaska can't spell "cheese," and now I want a sandwich.
North Dakota is "sorry," New York is not "listening," and Texas is not "normal," but you don't need me to tell you that.
Montana and Nebraska just want to be "beautiful," and South Dakota is thinking "beautifully." And they're all sucking in their stomachs when Kansas walks by because it wants to be a "princess."
Maybe they should all skip "dessert" with Missouri.
Meanwhile, Washington DC is having trouble spelling "bearable" which means someone thinks highly of themselves.
Illinois is in the dog house because they can't spell "anniversary." If they don't figure it out, they'll become Mississippi's struggle word: "independent." At the very least, they'll need some "therapy," which Arkansas can't spell.
I just hope they figure it out soon, before things get too "awkward," because you're certainly not going to get any help from Oregon with that word.