When Just Desserts are Just Deserts

on June 24, 2022
"Hey Kid, do you want to get some dessert before we order dinner?"
What, seriously? I exclaimed. If I had been wearing pearls, I would have clutched them like the last survivor of a shipwreck. You can't eat dessert before dinner, I said, more than a little aghast.
"Says who?" demanded Karl. We were sitting at Berger's Burgers, named after Heinie Berger, a baseball player from Greenfield, Indiana, who played for the Cleveland Naps from 1907 to 1910.
"You were going to get a milkshake with your dinner, right?" he continued.
Yes, but a milkshake is a beverage, I said.
"Not to hear your wife tell it."
Dude, do not mention the milkshake to her! And if you screw that up, tell her it was a small!
"Relax," said Karl. "She doesn't want me having dessert either, so I figure we face mutually assured destruction."
'She' was Alexis, Karl's younger daughter. Alexis was an organic vegan activist who had completed her MBA last year and now ran a large nonprofit dedicated to cleaning up the oceans. She was also dedicated to cleaning Karl's arteries. Sometimes I think she wanted to do it by hand with a drill and a bottle brush. She constantly badgered him about his diet and exercise. The only relief he got was when he and I snuck out for lunch or dinner.
"So does this mean you're having a milkshake and dessert?"
Shhhhh! Someone will hear you, I hissed.
"Kid, relax. It's not like you're going to get found out."
Do you not think Alexis has spies who report back to her?
Karl turned pale and scanned the restaurant. "That kid over there looks a little scrawny and pale. Do you think he's one of her vegan spies?"
That's Isaac, our waiter. He's cool; I think we're in the clear.
"OK, so are you having dessert first, or am I eating it without you?" Karl was like a dog with a bone about this dessert thing.
But what if I won't be hungry for my burger?
"Then skip the fries. They're pretty soggy here anyway."
"Hey," exclaimed Isaac as he walked past our table.
"You don't keep your oil hot enough, Isaac," Karl called after him. "You know I'm right!" He turned and faced me. "Come on, Kid. Live a little. You're a grown man now and there's no reason you can't have your dessert first. Or that we can't each order three desserts instead of eating hamburgers."
You don't understand, Karl. When I was a kid, my parents only let us have dessert on special occasions, and you absolutely had to eat all your dinner first. I started to worry that my dad might catch me and ground me. 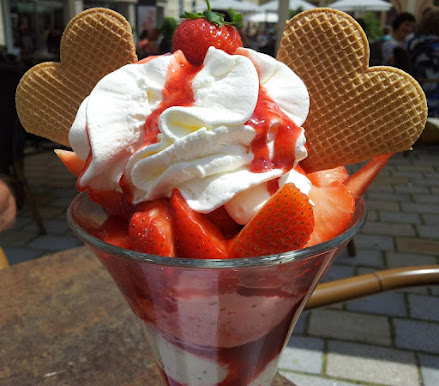 "Good Lord, Kid! You're an adult. You can do whatever you want, whenever you want, for as long as you want. And if you want to eat dessert first, there's literally no one who can stop you."
So you won't mind if I text a photo of you eating a sundae to Alexis?
"Hey, there's a line of trust we don't cross here."
If I did, I guess you'd be getting your just deserts.
"Your what? Did you say 'just desserts?'"
No, 'just deserts,' but you say 'deserts' just like 'desserts."
"Kid, I've been alive for a lot of years and I've never heard or read the phrase as 'just deserts.'"
It comes from the Latin word deserere, which means to desert or abandon, and it existed long before the post-meal sweet treat. The word 'desert' came to mean 'the reward or punishment one deserves,' hence the phrase.
"Don't say 'hence.' You sound like a snob."
Fine, I'll get a strawberry sundae if it'll make you feel better. Are you happy now?
"Rarely, but that's not important." Karl looked around for Isaac. "We'll have a strawberry sundae and a hot fudge sundae, please."
"Are you sure you don't want some cold, soggy fries to go with that?" pouted Isaac.
"No, I'm sure the ice cream will be cold enough."
Isaac went back to the kitchen, and several minutes later, he returned with our ice cream and a smug, self-satisfied smile.
Karl, I think something's up, I said after Isaac left. Isaac seemed pretty pleased with himself.
"Oh, I'm sure it's nothing," Karl said with a mouthful of ice cream and fudge sauce. It sounded like Ah'm fure iff nuffing.
He swallowed. "You're just imagining things." I relaxed a bit and dug into my sundae. Karl's phone vibrated and blasted the chords from "Ride of the Valkyries" — the "KILL THE WABBIT! KILL THE WABBIT!" part.
"That's Alexis!" hissed Karl. "She's FaceTiming me!"
I dove under the table. Oh God, is my dad here?
Karl swallowed what he had in his mouth, wiped his face with his napkin, and slowly answered the phone.
"Did I just hear that you're eating dinner and dessert?" shouted Alexis. Effing Isaac, I said, slowly emerging from under the table.
"Are you cheating on your diet with that shiftless ne'er-do-well friend of yours?" (She didn't actually say 'shiftless ne'er-do-well;' this is a respectable newspaper, after all.)
"Oh, no, there must be some misunderstanding, Pumpkin. We're just partaking in light refreshments."
"Then what are you eating?" she demanded.
Karl looked at his sundae, then he looked at me, and looked back at his beloved offspring.
"Uh, just desserts?"