Nothing Good Ever Came From a Committee

on July 15, 2022
Nothing good ever came from a committee.
A committee is a large group of people whose sole purpose is to develop new ideas or programs. And then to bury them under a pile of manure, so they never see the light of day even if you fired it into the sun.
Whether or not it's their sole purpose or just a happy accident, committees can take a good idea and overcomplicate it to where even its own mother wouldn't recognize it. It's like they see it as their sole destiny in life.
Take hand-washing, for example. Thanks to the last two years, everyone knows how to wash their hands. You only have to be told, "Wash your hands," and you know what to do. I could write that on a Post-It note, stick it in a restaurant bathroom, and you would know what it means.
I recently spotted an example of committee work in a bathroom. 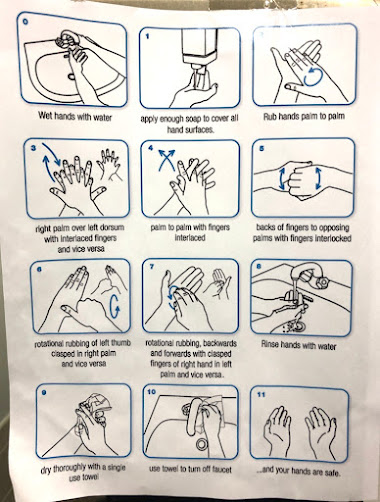 Gross, not that! It was a flyer that explained how to wash your hands in 12-step instructions.
Twelve. Step. Instructions.
No one needs that much explanation for washing hands, which is how I knew a committee designed it. I imagine some manager said, "I just need a flyer that says 'Wash your hands for 20 seconds.'
And the committee winked, tapped the side of its nose, and said, "Say no more."
What they did was unleash this full-page abomination when all they needed was a 3" x 3" sticker that said, "Wash your hands for 20 seconds."
I've served on many different committees over the years, whether working in the public sector or volunteering for a nonprofit, and I have seen the damage committees can do. They can turn some of the most idealistic go-getters into blubbering mounds of indifference who will never have another new idea in their lives.
To paraphrase Alan Ginsberg, I saw the best minds of my generation destroyed by meetings.
Because the whole purpose of a committee is not to solve a problem or create a program, it's to give people enough busy work that they can't actually do their real jobs.
When I worked in state government, there were days when I only had three hours of real work time because the rest of my day was taken up with meetings.
There's a law called Parkinson's Law that says work expands to fill the time available.
In other words, if we scheduled a 30-minute meeting, our meeting took 30 minutes. But if we scheduled a 60-minute block of time, the meeting would expand to the full hour.
The worst part about committees is that some teacher's pet always insisted that we have a mission statement.
"Why do we need one?" I asked once.
"So we remember what we've set out to do," said Dolores Webfoot.
"How could we forget?" I said. "It's the name of the committee: The Lead Poisoning Prevention Committee. We're supposed to prevent lead poisoning. That's our mission statement."
This didn't sit very well with Dolores, so she punished me by keeping me on the committee.
The problem with committee mission statements is 1) that no one cares. At all. It's science. 2) No one will ever actually see it. 3) Because we're never going to look at it ever again. 4) Because no one cares one whit about a bureaucratic committee's "vision."
Did I mention that no one cares?
I quickly learned to skip the first two meetings of any new committee. Because the first meeting is always dedicated to writing the committee's mission statement.
The second meeting is when everyone would argue for two hours — Parkinson's Law strikes again! — about the little tiny, ticky-tack parts of the mission statement.
"Are you sure we should say, 'people?' I think we should change it to 'individuals.'"
"But individuals sounds so cold and impersonal."
"Should we say we do these things 'for safety and health?' I think health is more important, so it should come before safety."
"But we can't be healthy if we're not safe first."
"I just don't want people to think we give health a lower priority."
"Don't you mean individuals?"
By the end of the second meeting, the mission statement had been hammered out and would never again be seen by human eyes. It certainly was never published anywhere, let alone shared with anyone's boss. No one ever called us up and congratulated us on a fine mission statement or told us that we would save the lives of a lot of "people" because we put "safety" before "health."
I'm not trying to imply that committees are completely useless. I'm saying it as loudly and clearly as possible.
Oh sure, there are times where committees have their purpose, and they can do good work.
Like party planning. Or keeping meeting rooms from being lonely. Or when you want to punish several people at once.
But if you want to convince me I'm wrong, you're more than welcome to try. First, you have to be able to recite your mission statement by heart.


Photo credit: Erik Deckers. That's me. I took that photo.