The Joys of Drinking From Garden Hoses When You're a Kid

on July 22, 2022
Maybe it's the decades of being nagged at, but I'm finally drinking a lot of water. (Just don't tell anyone that strategy works.)
For some reason, after mumble-mumble years, water finally tastes good. I enjoy it and usually drink around 96 ounces per day.
That's on top of the occasional soda, sweet tea, or mocha latte. Or another soda. And another sweet tea. I mean, I haven't completely taken leave of my senses.
And before anyone wants to tell me that I shouldn't drink soda or sweet tea, just save it. I don't need some healthier-than-thou evangelist stealing my joy and telling me I should skip sugared drinks or not eat processed meat or any of that bull-salami.
I don't tell you to turn off the TV and read more books, so keep your opinions to yourself.
But if I did, I would tell you to read real books, not the overachiever, success-envy manifestos you usually listen to on your Peloton.
It's weird to enjoy drinking water so much. When I was growing up in Muncie, Indiana, the water was just terrible. The city put so much chlorine in the water, it was like drinking from a swimming pool.
To the city's credit, we never had a boil advisory the entire time I lived there. Anytime we had a possible contaminant, Craig the pool boy just took care of it.
We also didn't drink much water as kids because we usually drank pop.
Pop is what people in the Midwest call "soda," which is what they mistakenly call it on the East Coast.
Soda is an unusual-sounding word used by unusual people. It doesn't roll off the tongue very easily; it's just a hiss followed by "duh."
Ssssssssssooo-duh. It sounds like a stupid snake.
Midwesterners are suspicious of anyone who asks for a soda. You're liable to get soda water, and you should be thankful for it, ya East Coast carpetbagger.
I didn't encounter the word "soda" until I was 20 and working as a camp counselor in Pennsylvania, where the counselors and campers were from New York. One evening, I went to the camp store and asked for a pop, and they looked at me as if I had corm growing out of my ears.
"What the $#&@ is a pop?" they asked, fingers traveling deep into their nostrils.
"It's a drink. You know, like Coke or Pepsi," I said.
"Oh, you mean soda," they said, breathing with their mouths.
"What the $#&@ is a soda?"
That's when I learned the East Coast is insane and makes up words for things. 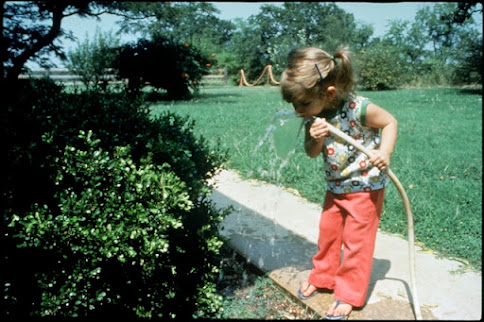 In Indiana, the only other acceptable word for pop is Coke. But it doesn't just mean Coca-Cola. It refers to any carbonated soft drink. Pepsi is Coke, Sprite is Coke, 7-Up is Coke. Even RC Cola was Coke, but it wasn't very good.
Who am I kidding? We were kids: we drank anything with sugar in it.
We didn't just drink pop, though. We drank sun tea, which is a magical kind of tea brewed in direct sunlight in giant glass jars, so the tea fairies can bless it or something. I could never tell the difference between sun tea and regular tea. It was cold, it had sugar in it. What else did we need?
We had never heard of sweet tea that far north, though. Trust me, if we had known about it at that age, we would have bathed in it.
We also drank Kool-Aid because it was somehow healthier than pop. At least that's how it was advertised since our moms controlled how much sugar they put into it.
The correct amount was "a lot," which is why my mom almost never bought it. It was a summertime drink in our house, so we never had it in any month with an R in it.
Or a J.
Or an M.
Kool-Aid was a great way to disguise the taste of our city water because dumping in sugar and powdered artificial fruit flavoring was almost the only way we would drink it.
Almost. We also drank from garden hoses.
Why? Because I'm part of Generation X, the overlooked generation in the war between the Millennials and the Boomers.
We're the tough generation who saw it all and did it all. We survived and even thrived in our childhoods. We played hard, and no one ever brought us orange slices and bottled water after a game.
We were latchkey kids, growing up without helicopter parents, coming home after school, and living unsupervised for hours at a time. We went out to play in the morning and ran home when the streetlights came on.
And we drank deeply from hoses; when you're 10, drinking from a hose is like drinking from the cleanest, purest spring.
The water was cold, after you got rid of the warm stuff that had been inside the hose for three days. And the chlorine was covered up by that been-in-the-garage-all-winter smell.
We may not have drunk very much water the rest of the year, but in the summer, when we had unfettered access to hoses around the neighborhood, we were well hydrated, and our sweat didn't come out like honey.
It was a great system until we all turned 21 and discovered a brand-new kind of water: beer!