The Trauma of New Shoes

on July 08, 2022
I am traumatized by shoes.
OK, that sounds weird and more than a little creepy. I should say, I am traumatized by MY shoes.
That's not better.
When I was growing up, my mom had very definitive, if idealistic, views about boys' shoes. In her mind, boys only had two uses for shoes: playing and special occasions, which included school.
School is not actually a special occasion, especially when you're an 8-year-old boy who refuses to accept that long division has real-life applications. Still, the rule was that I would only wear my gym shoes — we called them gym shoes or tennis shoes; there were no other kinds — on days that we had gym in elementary school. On all other days, I was supposed to wear my good shoes.
Calling them good shoes implied that there were bad shoes or evil shoes, which, to hear grownups in the 1970s tell it, were gym shoes.
These were the same people who, just 20 years before, had been told they would bring about the collapse of civilization if they wore dungarees — "blue jeans" for anyone under 30. Those teenagers openly rebelled whenever they could, wearing Satan's pajamas to school, to the soda shop, or to the big dance. And God help us all if they wore Satan's bathrobe, a leather jacket.
Twenty years later, these same denim dissidents believed that wearing gym shoes to school would bring about the fall of civilization, and so all the kids at my elementary school wore our good shoes every day.
This lasted for all of one week before we abandoned them in favor of never wearing them again. Civilization seemed to do pretty well, although now I'm wondering if maybe it was more of a slow, 40-year collapse.
I quit wearing my good shoes to school because we had recess every day, which wreaked havoc on my Buster Brown knockoffs.
By the second or third day, I would come home with my shoes covered in gray dust.
"What did you do to your new shoes?" my mother demanded
"We pretended we were at the beach and covered our feet in the playground gravel."
Another day, I came home, and I had worn down the toes to raw leather.
"Now what did you do?" asked my mother.
"I was trying to extend the life of my bike's brakes."
My mom's reaction was measured at a 4.7 on the Richter scale 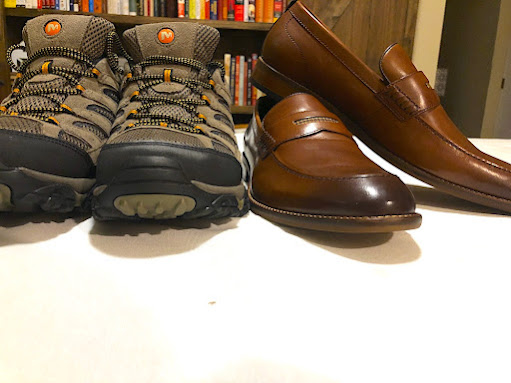 I never understood why I needed good shoes in the first place. It wasn't like we had any actual special events to go to. We never went to church or anything. And we rarely went out to dinner because "we had food at home." But if we did go out, it was never to the kind of place where young boys were expected to wear good shoes. (To be fair, we didn't have places like that in Muncie, Indiana in the 1970s.)
Invariably, when it was time to wear the good shoes, we would learn I had outgrown them in the last several months.
"Why didn't you tell me you had outgrown them?" my mom said, trying to cram my foot into the too-small shoe.
"Because I didn't know it until right now," I said.
"Why didn't you wear them a few months ago?"
"Because we don't go anywhere!"
Then I would get into trouble for being a smart ass.
I wasn't wrong, though. If you want me to wear shoes that are only for special occasions, then maybe we should go out for, you know, special occasions. Eating at a restaurant with the words "Bell" and "Taco" in the name is not special.
So I grew up feeling guilty whenever my mom bought me a new pair of shoes, usually because I had worn them until they looked like they had lost a badger fight. She would always remind me of the cost of the shoes and accuse me of not taking care of my stuff, and that I needed to be more careful because this is why we can't have nice things.
Even now, I get anxious when it's time to buy a new pair of shoes. I wear them as long as I can, usually beyond the point where they should be worn in polite society.
This past week, I ordered two pairs of shoes on Zappos and was filled with an existential dread, worrying that I was going to get yelled at because my last pair of shoes was coming apart at the stitching.
The shoes showed up at my house a few days ago, and I've been a little worried about wearing the dress shoes. I tried one on and saw that it fit, so I took it off and haven't worn them since. Not because I don't want to wear them, it's just that I'm still feeling the decades-old dread at what could happen if I make a bad choice.
Like this upcoming weekend: I'm going on a bike ride, but my brakes are a little wonky, so should I wear my dress shoes or the new hiking shoes?

My new humor novel, Mackinac Island Nation, is finished and available on Amazon. You can get the Kindle version here or the paperback version here.
family mom shoes
Location: Orlando, FL, USA