You've Got Mail! No, the Other Kind

on July 01, 2022
When was the last time you received a letter? A really-and-for-true letter written specifically to you from someone you actually knew — a letter from a family member, a friend, or a pen pal.
Someone who had news to share, so they wrote or typed a message on paper, stuck it in an envelope, stamped it, and mailed it from their own home.
I still get real letters occasionally, and it's always a special thrill to receive them. I also send letters I have typed with a 70-year-old typewriter. (I have another that's roughly 95 years old.)
I remember when I was a kid and received a letter from a pen pal or friend. I used to think about how cool it was that someone wrote a special message just for me, and the entire United States post office made sure my letter got to me three or four days later.
That makes a deep impression on a boy prone to thinking heady things like this. I treasured those letters and read them several times before writing back.
I had a pen pal in Japan for a while. International postage was expensive in those days, so I had to write on very thin onion paper. I could only write on three sheets because a fourth would almost double the price of the letter. I had to write small, which I already did. And I had to write neatly, which was nearly impossible. 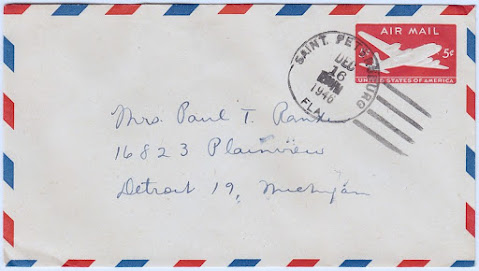 These days, email and texting have replaced letters, and maybe we're not the better for it. We can send messages whenever we'd like, as often as we'd like, absolutely free, with no worries about weight or length. I can send entire books of text in an email, and it won't cost a thing.
I have a new friend who lives in Singapore, and we text each other on WhatsApp any time of day or night. Whenever I'm awake, she's sleeping, but I can send a note that will arrive with a tiny *ping*, waiting for her to wake up. Her answer will arrive during my overnight with a *ping*, and I can respond the next morning.
I miss the days of letters, though. The anticipation, the waiting, the wondering, "What does it say? What does it say?" Getting a handwritten envelope with your name on it was like receiving birthday presents: the moments before you open them are filled with stampeding curiosity, believing it could be anything in the world.
(Until you open it up and find your grandmother got you tube socks for your 10th birthday. Still a little frosty about that.)
The early days of email were a bit like that. Not the tube socks thing, but the eager anticipation because not everyone had email, and spam didn't exist. So any new message held great potential.
Now, 32 years later, I'm so sick of email that I want to heave my phone and laptop into the nearest gator-infested lake and be done with them forever.
It's not that I don't like receiving messages anymore. There's Just. So. Much. Of it. I receive a couple hundred messages a day, most of which are newsletters, coupons from restaurants, and occasionally, actual emails from clients and friends.
(If you're reading this and you send me emails, then you're in that last group. I love hearing from you.)
But not all emails are helpful or interesting. For example, I get emails from LinkedIn telling me that someone has sent me a message and that I can read it on LinkedIn. Rather than sending me the actual message, I get a notification that says, "Some interesting person on LinkedIn has sent you a message, and it's probably pretty cool. Click here if you want to read it."
So I open the email, and the message says, "SCREW YOU, JACKWAGON! We're not sharing this actual message in some email" — and they say "email" like it's a dog turd in church — "you have to come to our message center to read it."
Which I do, only it's some message from some LinkedIn spammer who wants to sell me some kind of web tech I've never needed before.
In other words, LinkedIn lied to me, and they used my email to do it.
They don't do anything to stop these filthy, rotten, stinking spammers. Instead, they send me an email that makes me go to their stupid website to find a message I never wanted and waste several seconds of my life to find this.
Email technology has saved us so much time and money. We can communicate with people in a matter of seconds. I can send messages from here to Australia in a matter of seconds.
And now we have all this free time, time we could be spending to better ourselves, learn new skills, read books, or create art.
Except we don't. We take all that extra time, and we fill it up with more emails and more messages. We try to send even more messages because it somehow saves us more time, except it doesn't really.
I'm always interested in receiving letters from people, and if you'd like to send me one, I'd love to read it.
I'll email you my address.

My new humor novel, Mackinac Island Nation, is finished and available on Amazon. You can get the Kindle version here or the paperback version here.
email letters mail
Location: Orlando, FL, USA