Baseball, Nostalgia, and the Cincinnati Reds

on August 19, 2022
One of the best parts about baseball is the nostalgia. The stories of the greats and the not-so-greats. The once-in-a-lifetime plays and the blunders that fans will talk about for years. I'm not interested in the statistics and the numbers; I love the stories, the achievements, and the banter between the announcers.
I'm a lifelong fan of one of the most storied franchises in all of baseball, the Cincinnati Reds, the oldest team in Major League Baseball. They celebrated their 150-year anniversary in 2019 as the oldest continuous team in professional baseball.
But it's tough being a Reds fan these days. I've been a part of the Reds Nation since the mid-70s and The Big Red Machine, one of the greatest teams to ever play the game. I cheered on the greats like Johnny Bench, Pete Rose, and Joe Morgan, watching them on TV or live once a year.
My parents used to take us to the game so we could watch my heroes in action. And then we would leave before the 9th inning to beat the traffic, no matter the score, and we would listen to the last inning on the car radio.
It's hard to be a Reds fan this year, though, because, well, they suck. 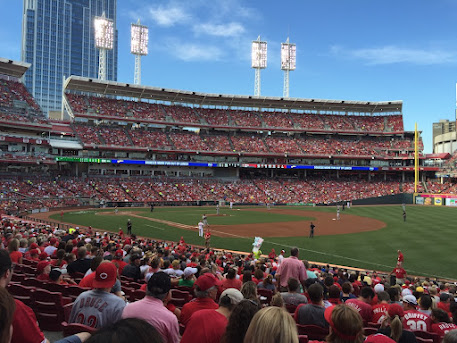 I don't say this as some high-level sports analyst who can tell you that a pitcher couldn't even throw a fit. I can only tell you whether he just gave up the game-winning home run for this sixth time this season. I can't tell you whether the general manager is an idiot for trading away his best players. I can only point to the losing record and question whether the GM was hit in the head.
So no matter whose fault it is (the GM's; it's the GM's fault), you watch your team, no matter how they're doing.
We had a nice break this year: The Reds were a part of the Field Of Dreams game, facing off against another mediocre team, the Chicago Cubs.
The Field of Dreams is in Dyersville, Iowa, just 25 miles west of Dubuque. It's a city so small that my spellchecker doesn't even recognize it, and it knows Cwm, Wales.
MLB cranks the nostalgia up to 11 for this game, hearkening back to a movie that's only 33 years old. The homespun pageantry and cornfield-ness of it all make us think we're looking at a field that's 103 years old.
There have only ever been two MLB games played on the Field Of Dream: This year's game and last year's game between the Chicago White Sox and the New York Yankees.
It's rather confusing because the movie is about the Chicago White Sox who threw the 1919 World Series and were banned from baseball for life.
In the movie, Ray Kinsella built the magical field to let the White Sox ghosts come back and play the game they loved. They wanted forgiveness, to feel the grass and dirt under their feet again. So it was fitting that last year's nostalgia party included the Chicago White Sox. Except they played The New York Yankees.
Except who benefitted from the White Sox's dishonesty in 1919?
That's right, the Cincinnati Reds. They were the team that won the World Series.
The nostalgia felt a little forced like the field is a shrine to games long past. But it's not a shrine. It's not Crosley Field, Wrigley Field, or Bosse Field in Evansville, Indiana, home of the Evansville Otters and the Racine Belles in A League Of Their Own.
The Field of Dreams is a replica. It doesn't hold the history of these old places.
And yet, I got sucked into the nostalgia along with millions of others. The magic was manufactured, but I embraced it.
The game opened with two of the movie's signature moments: Ken Griffey, Sr. and Ken Griffey, Jr. — the first father-son duo to play on the same team — stepped out of the cornfield. Ken, Jr. looks at his dad and asks, "Hey Dad, you wanna have a catch?"
"I'd like that," said Ken, Sr.
We knew the line. We all knew the line. Every son of a father who ever watched the movie could tell you that line.
It's the scene where Ray Kinsella sees his dad, John, as the young man he used to be when he played baseball. The music swells, John asks if he's in Heaven, and Ray looks at his dad and asks, "Hey, Dad, you wanna have a catch?"
And every man who ever played catch with his father, or wishes they still could, blinks back tears and looks away from their family next to them on the couch.
"It's allergies," they lie. "The movie is dusty, that's all. Shut up."
Because that's what baseball is about. It's about stories, not statistics. It's a children's game that some are lucky enough to play as adults. And we watch and remember when we played. We remember what we saw. We share those memories with our kids and hope they grow up with their own memories that they share with their own kids.
We love a game where — as Jim Brockmire said — "your actions determine your fate, not a stupid clock." Baseball nostalgia is about where you were when something happened and the relationships you had with the people you watched it with.
It's about time you spent together, playing catch, watching a game, or listening to the last innings curled up in the back of your parents' Plymouth.
You wouldn't trade it away for anything, but the Reds' GM might. The guy's an idiot.