It's Rude to Recline Your Airline Seat

on October 07, 2022
"Kid, guess what happened to me last week," said my friend, Karl.
Your sex doll arrived in the mail.
"What? I never—"
You murdered an old hobo.
"Cut it out!"
You told me to guess.
"Fine. That's my fault for asking. No, Kid, I was going to tell you about this terrible flight I had coming back from Calgary."
You're no fun, I said. So what happened? Karl and I were meeting for lunch at Stupid Flanders, a Belgian-themed restaurant. We were enjoying their house brew, Broad Tripel, a Belgian-style ale — which is why it's spelled that way — brewed on the premises. Karl had returned from a writers conference in Canada and was filling me in on the latest gossip in the publishing world. Well, the Canadian publishing world, and I was nodding off.
"I was reading a book on the plane and this jackwagon in front of me leaned his seat back."
No! I plonked my tripel on the table. You mean in a reclining position? That monster.
"I'm being serious, dammit. He leaned his seat all the way back so I could see the top of his shiny bald head."
Yeah, that's terrible. The guy sounds like a jerk.
"I thought so, too."
Our server, Roos, brought our burgers and fries, and we started in on our food. 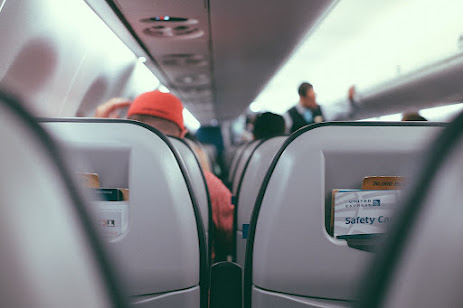 Are people even allowed to lean that far back on a plane? I asked. I mean, the airlines already squeeze so many seats in there, leaning your seat back is against the Geneva Convention.
"It's not agains the rules, but most travel experts consider it rude and immoral to fully recline. I remember a story in early 2020, before the pandemic, where a woman leaned her seat all the way back into a guy's space. He punched the back of her seat several times until she raised back up."
I stared at him, open-mouthed. Seriously? Punched the seat?
"Yep. When she complained, the flight attendant gave the guy a free drink. And when the woman complained about it on social media, she got roasted."
You didn't punch anything, did you? Or anyone?
"No, no. The last thing I need is to spend several years in a foreign jail where I don't speak the language."
Dude, it's Canada.
"Hey, prison is prison. And it can be rough when you look as good as I do." Roos snorted and stifled a laugh behind me; I was tipping her extra today.
I saw an article that said 77 percent of people consider reclining a seat to be rude, I said.
"I read that, too. But even with a number that high, a third of the people still did it, although most of them asked first."
I usually wedge a big water bottle on the tray table under the tray lock, which blocks them.
"I wish I had thought of that," said Karl.
So what did you do? I asked.
"I politely asked him to lean his seat back up."
And did he? Did he actually raise his seat? I looked around for Roos. Two more Broad Tripels, alstublieft, I said in perfect fucking Flemish. (It means "please," and it's the only Flemish I know.)
"Oh, sure. He said, 'I beg your pardon. I should have considered the person behind me first.'"
Really?
"Of course not! The guy was a class A jackwagon! He insisted that it was his right as an American to take up whatever space he wanted."
I don't think that's one of our rights.
"I know! Plus we were flying Air Canada and we were still in Canadian airspace. I told him I couldn't read or use my tray and he, 'Too bad, I paid for my seat, and I'm going to use it to its full advantage.'"
Even if it meant you couldn't use your seat to your full advantage?
Exactly.
Roos delivered our ales and another order of frites. I think she was flirting with me. So did you say something to the flight attendants? I asked.
"Well. . . not exactly."
Oh God, what did you do? Are you on the no-fly list now?
"No, no, nothing like that. I was really subtle."
You're about as subtle as a bear in a library. What did you do?
"Well, first I pointed the air vent toward his head and then bounced my leg against the back of his seat.."
Did that fix it?
"He raised his seat a couple inches, but nothing more. I was going to say something to the flight attendant, but he said something to his seatmate about taking an Ambien and to not let him sleep through the landing."
I'm afraid to ask: What did you do?
"I waited until he was asleep and then I took out the Sharpie I use to sign books and drew something on top of his head."
I snorted into my beer. What was it? I said.
"Well, it's a five-letter word you won't see on Wordle."
I was laughing so hard I had to put my beer down. Karl, that's priceless. What did he do when he woke up?
"Nothing. He went home with it on his head."
Do you think it was wise to do that, though?
"I was just exercising my rights as an American to express myself to my full advantage."

My new humor novel, Mackinac Island Nation, is finished and available on Amazon. You can get the Kindle version here or the paperback version here.
airlines Karl rudeness
Location: Orlando, FL, USA