Florida Turns Its Back on Key Lime Pie

on November 04, 2022
Indiana has its own official state pie, which the state senate voted on and everything. Someone said, "I make a motion that we adopt the sugar cream pie as our official state pie."
Someone else said, "Second!"
And then everyone shouted "Huzzah!" and the resolution passed.
I may be oversimplifying things a bit. Plus, this happened in 2009 when no one said "huzzah" anymore.
That day, the Senate passed a resolution to honor Mrs. Wick's Pie Shop and Wick's Pies of Winchester, based in East Central Indiana. Most senators were for it, although Senator Grumpy Gus, Lindel Hume of Princeton, groused that the Senate had better things to do than waste their time voting for a state pie.
You know, Senator Grumps, you could get to the other stuff a lot faster if you didn't waste time complaining about how you didn't have any time.
When Mike Wickersham handed out slices of sugar cream pie to the Senate that day, I hope Senator Hume didn't get any. Anything sweet would have been wasted on him.
Currently, four other states have a state pie. Illinois has pumpkin, Texas picked pecan, which is pronounced "pecan," and Vermont made a mountain out of a molehill: They chose apple, but it legally has to be served with a glass of milk and a slice of cheddar cheese that weighs at least a half-ounce, or a scoop of vanilla ice cream.
Seriously, Vermont? Get over yourself. This is why no one likes you. Why can't you be chill, like "Live Free or Die" New Hampshire? 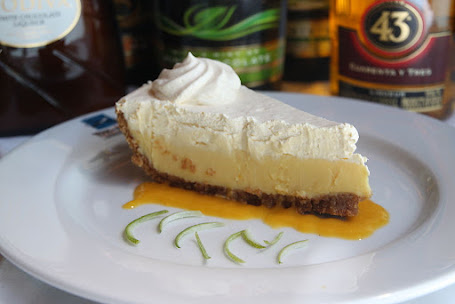 And Florida adopted the Key lime as their state pie. Which is great because Key lime is a great pie. Contrary to popular belief, it's not made from limes, but from Key limes, also known as Mexican limes or West Indies limes. They're light yellow and more tart and aromatic than regular limes.
But Florida's governor, Ron DeSantis, who can't seem to do anything without insulting people, threw Key lime lovers into a kerfuffle earlier this year when he signed SB 1006, naming the strawberry shortcake Florida's official dessert.
Floridians were shocked, visitors were aghast! How dare he? I mean, we all know the guy hates the people he represented, but this is one of his worst offenses against the Sunshine State.
OK, it's not the worst. There are many above that, but this was definitely near the top of a very long list.
The problem? Strawberry shortcake is not even from Florida! It's an interloper from Europe by way of Philadelphia, where Eliza Leslie popularized it in 1847.
But Key lime pie was invented in Florida. At least that's what Floridians say, mostly because Key limes (Citrus aurantiifolia) come from the Florida Keys. Which is why Key lime is capitalized.
Oh, sure, there was some nonsense in 2018 by carpetbagger Stella Parks who said it was created in a Borden Milk test kitchen in New York, as an alternative for their Magic Lemon Cream Pie recipe.
However, several Key Limers sprang to the pie's defense and said it was created in the mid-1800s by a woman known as Aunt Sally when she cooked for Florida millionaire William Curry.
As a result, the world has accepted the Key lime pie as Florida's go-to dessert. As in, if you go to Florida for dessert, get Key lime pie.
No one thinks of strawberries when they think of Florida. They think of Key lime pie, being bitten by a shark in New Smyrna, and the Bob Ross Art Workshop and Gallery, also in New Smyrna.
Also, oranges.
Except Florida grows a lot of strawberries.
"We're the second-largest production of fresh strawberries in the U.S. and a lot of people don't know it," Sue Harrell of the Florida Strawberry Growers Association said in a statement.
To be clear, California produces 90% of the country's strawberries, and Florida's contribution is 8%, so settle down, Sue. Nobody likes a blowhard.
Don't get me wrong; I love strawberry shortcake. There are few things better than a bite of sponge cake soaked in strawberry juice. But that doesn't mean it should supplant Florida's universally-accepted pie as the state's One True Dessert.
Even Florida's Lieutenant Governor Jeanette Nuñez tweeted to one of the original bill's sponsors, "Don't Tread on Key Lime!"
But, but, whined Harrell, "The strawberry industry has always been pushed to the side and everything was all about citrus."
That's because citrus is from here, Sue! Oranges, lemons, limes, grapefruits, and Key limes are from here.
Not like the strawberry, which comes from a whole other country. I'm surprised DeSantis didn't illegally send them to Martha's Vineyard.
Instead, the Florida senate passed the strawberry shortcake bill 36-0, and the house passed it 109-4. So bless those four heroes who knew the real score. And for the remaining 145 Florida haters, I hope you get a strawberry seed stuck between your molars, and you can't get it out with your tongue, and you don't have access to dental floss for several hours.
That never happens with Key lime pie.
Or sugar cream pie, which is the best pie in the world. Indiana said so.