Orlando, Florida is the Most Zombie Resistant City

on November 18, 2022
I don't think I could survive a zombie apocalypse.
That is, I don't think I would want to.
Who wants to live in a world full of undead brain-eaters devouring anyone who isn't already a mindless, shuffling lummox, converging on those few unspoiled people, trying to eradicate them?
Like when I tell people I never saw Game Of Thrones.
I don't know why we're fascinated with trying to survive a zombie apocalypse. Why would you want to go on in a life like that? Society has collapsed, food is scarce, and the wifi sucks. Everyone you know is trying to eat you, and your only companion is Helen from Accounts, who's about as useful as a match in a forest fire.
Your only options are to end your suffering quickly or spend the next 30 years listening to Helen yammer on about her collection of 1980s quilting magazines. I'd rather douse myself in ketchup and fling myself at a herd of zombies.
The problem is I live in the city that is ranked as the most zombie-resistant: Orlando, Florida. Which means I'll probably survive far into the apocalypse, much to my annoyance.
The people at Lawn Love, a lawn care service company, which makes them the pre-eminent experts on zombie survival, recently released a report about the best and worst 200 cities to survive a zombie apocalypse in.
They looked at factors like the number of people in poor health, the number of supermarkets and hunting supply stores per capita, and the number of basements or bunkers under homes. There aren't a lot of basements in Central Florida because the city was built on a swamp, and they fill up with snakes and brown recluse spiders. 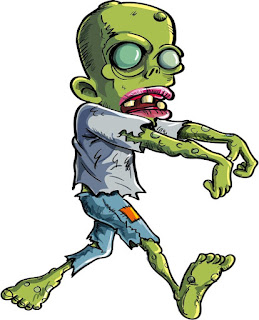 But Orlando earned its number one spot because we have a lot of hospitals (30th in the nation), and we ranked first both for the number of grocery stores and hunting stores per capita.
Orlando also ranked 16th out of 200 for vulnerability (which includes population density, physical inactivity rate, and the share of population in bad health).
I think what it means is there are a lot of old and infirm people who will be picked off by the zombie horde, leaving you time to escape.
It's like the joke about the two guys who are about to be chased by a bear. One guy switches his hiking boots for running shoes. "You can't outrun a bear," said his friend. "I don't have to," said the guy, "I just have to outrun you."
Tampa and Miami also made the top 10, coming in sixth and eighth, respectively. That makes Florida one of the best states to try to survive the end of civilization, which is good because it's tough to try surviving everything else.
Rounding out the top five on the list are Salt Lake City, Honolulu, Portland (Oregon), and Colorado Springs.
Personally, I think Honolulu would be the best place to survive a zombie apocalypse. Just get rid of the zombies on the island — throw them out to the sharks — and you can spend the rest of your life there without any worries.
You won't have to worry about other zombies showing up, like on the mainland. They'll have zombies streaming in from everywhere, like college kids descending on Daytona Beach at spring break. A zombie could shuffle from Alaska to the tip of Florida without any difficulty. Sure, it might take a few years, but what's time to a zombie?
But they can't swim, so any island is a great place to be. So why not spend the rest of your life in paradise?
You just won't have very good luck in Paradise.
Nevada, that is. Paradise, Nevada. The Las Vegas suburb came in 199th out of 200, beating out Sunrise Manor, Nevada, another Vegas suburb.
The rest of the bottom five on the list? Paterson, NJ; Spring Valley, NV; and Enterprise, NV. They hit rock bottom over a lack of underground basements/bunkers (Sunrise Manor and Enterprise tied for last), population with the poorest health (Paterson was 197th), lowest walkability (Sunrise Manor was dead last), fewest hunting gear stores (Sunrise Manor tied for last), and fewest supermarkets (Paradise and Paterson tied for last).
With such low scores, it's a wonder people want to live in those places in the first place, let alone try to survive zombies overrunning everything.
Indiana didn't fare too badly on the zombie survivability list. Fort Wayne came in 88th, but Indianapolis came in near the bottom at 166th. Don't feel bad, though, Indianapolis. New York was 180th, and Los Angeles was 181st. So I don't want to hear any more of this "flyover state" nonsense from either of you.
So if you want to wait out the looming zombie apocalypse, Orlando is the best choice, but Honolulu will be the more pleasant place.
Not me, though. I'll be waiting in the middle of the street with a big smile and a bottle of ketchup.