on December 02, 2022
It's Christmas time, and you know what that means. That's right, Santa is watching you and silently judging you. And you won't know whether he's decided you're a good person until Christmas morning when you get a nice gift in your stocking or a lump of coal.
It used to be that Santa or one of his colleagues would leave a switch for naughty children, and I don't mean the handheld video game from Nintendo. For you young people, a switch is a thin tree branch used for spanking children, mostly in the 1800s and early 1900s. Old School Santa would leave it behind as a message to the parents: "You know what to do."
Of course, Santa doesn't do that any longer. He leaves gifts for everyone, no matter how rotten your kid is. Those of you who think children can never be rotten were clearly never bullied in school. And ignore your child's screaming tantrums in restaurants.
But not in Europe, man. In Europe, Santa and his helpers are judgmental moralists who will dole out punishment to the little monsters who deserve it.
In Italy, La Befana will break into your house and leave gifts or coal in your stockings, depending on how good you have been. In The Netherlands, Sinterklaas had an assistant, Zwarte Piet (Black Pete), who became rather problematic and got canceled. Before that, Piet used to place gifts or coal into shoes left near the fireplace. Now, Sinterklaas has to do it himself. It's a good thing The Netherlands is so small.
In other countries, if you were naughty, you might receive a bundle of twigs or bags of salt, garlic, or onions. Either that or your parents wanted you to make soup.
And in Central and Eastern Europe, Krampus is Santa's assistant, and his job is to mete out punishment via a birch rod he carries with him.
So why mention all this? Because if you don't watch out, Santa will send some of his goons to deal with you, and you're not going to like it. 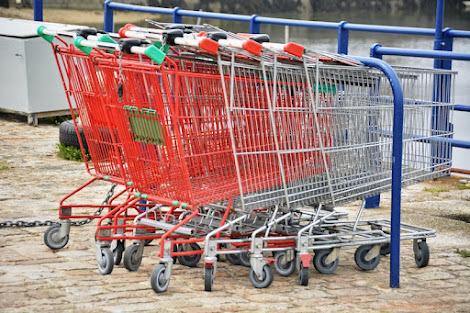 Like, those of you who don't return your shopping cart to a corral at a grocery store. If you're one of those people who leave your cart in the parking lot instead of pushing it to the corral, there is some question about whether you're actually a good person.
In 2020, someone proposed the Shopping Cart Theory as a way to determine a person's moral character, and I think it's something Santa should take under advisement.
"To return the shopping cart is an easy, convenient task and one which we all recognize as the correct, appropriate thing to do. To return the shopping cart is objectively right," says the theory. "It is not illegal to abandon your shopping cart. Therefore the shopping cart presents itself as the apex example of whether a person will do what is right without being forced to do it."
Ultimately, says the writer, "(t)he Shopping Cart is what determines whether a person is a good or bad member of society."
In other words, Santa will visit you if you return your shopping cart to the corral. If you don't, Krampus will blister your butt with a birch rod. Or at least, he should.
There are those who will argue that they don't have to return the cart. "It's not my job," they grouse. "That's what they get paid for." They'd probably argue against saving someone from a burning building because that's what we pay firefighters for.
Grocery stores may have staff who retrieve the cart from where you left it three miles away from the store, but that's not their purpose for working there. They're there for customer service, not to clean up after your laziness.
It's not my job to return your wallet when you drop it or tell you when you have food in your teeth, but I do it because I'm a good person. If you follow the "it's not my job" philosophy, you will find many people who decide it's not their job when you need help.
Or they'll say, "I'm providing job security for the workers." No, you're not. That's like littering so people have something to do for community service. You provide job security by shopping there. And also not using the self-checkout lanes because they're just another way for grocery stores to hire fewer people.
People who refuse to return their carts are the same people who don't tip their servers, saying, "Well, they should find a different job if they want to earn more money. It's not my job to supplement their income."
Look, you can be a heartless human being all you want, but the bottom line is, you're going to get coal in your stocking from Zwarte Piet and La Befana and a butt-whupping from Krampus.
At least you're providing them with job security.

My new humor novel, Mackinac Island Nation, is finished and available on Amazon. You can get the Kindle version here or the paperback version here.
Christmas Santa Claus shopping
Location: Orlando, FL, USA