I Hear Of 'I Hear of Sherlock Everywhere' Everywhere Podcast, Website Announced 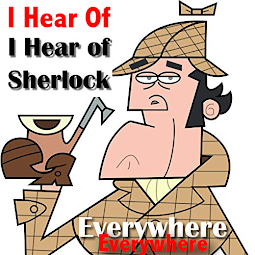 "This is an exciting time for IHOSE listeners," said website host Erik Deckers. "For too long, fans of hosts Scott Monty and Burt Wolder have fumbled their way in the dark to find each other, only stumbling onto one another through chance encounters at bookstores, Sherlock Holmes conferences, or certain strip clubs."
The I Hear Of 'I Hear Of Sherlock Everywhere' Everywhere podcast will include interviews with other fans and notable scholars who have made in-depth studies of the original IHOSE episodes. They will also include authors of IHOSE pastiches and cosplayers.
"We're also going to hold a bi-weekly contest called Seminal Sonnets. Each contest will contain a 14-line lyric poem about a past episode, guest, or quote," said Deckers. "Contestants will need to write down the 14 lines and figure out which episode the sonnet is about. We'll choose a winner at random, and he or she will receive a piece of IHOSE paraphernalia from our extensive collections."
IHOIHOSEE has already secured major sponsorships from corporations like cryptocurrency exchange FTX, Kodak Corporation, and a generous donation of 20,000 shares of Dogecoin.
Other plans for the IHOIHOSEE media venture will include an academic-type journal dedicated to IHOSE-iana, a blog, and a weekly comic strip dedicated to the hilarious adventures of young Scott and Burt getting into various misadventures as they solve crimes.
Deckers said they're also in discussions with noted IHOSE publisher, MMXX Publishing, about sponsorship for a spinoff podcast that will explore past episodes of IHOSE's secondary podcast, Trifles. This new venture will be called Trifles-about-Trifles.

"We'll look at some of the past scholarship about Trifles, like which episodes were solo efforts by Scott or Burt, how many times Burt made Scott laugh and vice versa, or the state and varieties of Burt's facial hair," said Deckers.
The IHOIHOSEE podcast and website will launch on April 1st, 2023.
###