on January 06, 2023
Have you ever been to a party and wanted to stand on a table and shout, "Good GOD, you people are annoying! Get out, now!" at the top of your lungs?
That's how Lake Superior State University's annual banned words list works. Each year, on December 31st, LSSU publishes its annual List of Banished Words for Misuse, Overuse, and General Uselessness. This is their 48th year for the list and my 18th for writing about it. I've been doing this for over one-third of the list's existence.
Except this year's list is not a crowded-room shout, it's a mumbled "Meh, get out."
Because this year's list only had ten words. Ten!
There were ten words last year, too.
Have they given up? Is this now just an afterthought they bang out on December 30th at 4:50 PM? They received more than 1,500 submissions this year, yet only .67% of them made the cut? Even Harvard University has a 4% acceptance rate.
Is LSSU saying it's easier to get into Harvard than to banish the year's most annoying words?
They just haven't been as productive, even though there are more annoying words than ever. They banished 13 words in 2020, 18 in 2019, and 12 in 2013. But they ousted 26 words in 1994, 38 in 1992, and 45 in 1989.
Come on, you guys! They did that in the days of typewriters and mail-in submissions. We have artificial intelligence and cloud computing, and you could only manage ten words?
In the past, LSSU banished annoying words like "At the end of the day" in 1999 and 2022; "superfood" in 2013; "to solution" in 2000 (a truly deplorable verb); and "high tech" in 1984.
And yet, it's the high-tech approach that is sending the list into the toilet. 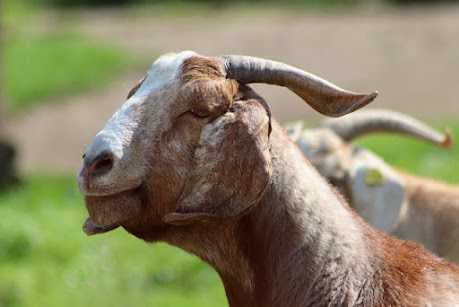 So this year's list is as far from being the GOAT as possible.
Because out of the 1,500-plus nominations for useless words, GOAT was the top of the heap, the cream of the crop, the greatest of all — never mind.
This has been so overused and diluted, it has lost all meaning, like the word awesome (banished in 1984 and 2007). Now it's used to refer to someone who is only pretty good at what they do.
Like saying Mike Tyson is the GOAT when it's clearly Muhammad Ali. Even Tyson said so.
Or saying, "Man, that sandwich was the GOAT."
"Dude, it was literally the same thing you ordered yesterday."
So, moving forward, stop saying GOAT.
Also, stop saying "moving forward."
Since we all travel through time in a linear manner, there's no other way we can move. It's like saying "going forward," which was banished in 2001. That was replaced by "on a going-forward basis," and much later, "on the go-forward," which is the worst thing ever. (I once told a client to stop using that phrase.)
"Moving forward" is the more cumbersome "from now on." As in, "From now on, I will stop saying 'moving forward.'" It actually has one less syllable and uses fewer letters. Moving forward just makes you sound pretentious.
I guess "it is what it is."
Which made a return visit after being banished back in 2008. I had hoped its prior banishment put an end to this verbal vomit. But like every zombie movie, the thing just keeps coming back, shambling its way through our vocabulary.
I confess to using the phrase a few times, but I prefer the more jaunty, "What are you gonna do about it, sucker?"
Does that make sense?
Don't answer that because that got tossed, too. Some submitters thought it was mindless filler, showed insecurity on the asker's part, or was just plain passive-aggressive. "Needy, scheming, and/or cynical," LSSU said in this year's press release.
Irregardless, we need to stop using it.
Except, "irregardless" — finally! Thankfully! — got the axe, and I couldn't be happier. This may make up for only having ten words.
I have hated this word since the late 1980s, and LSSU is just now getting around to banning it? It's repetitive and redundant. Most dictionaries — at least the good ones — call the word "nonstandard," which is Word Nerd for "This makes you sound like an idiot."
So just quit it.
Except don't quiet quit it, because "quiet quitting" is out, even though it's not a real thing.
Quiet quitting is what it's called when people only work their required 40 hours per week and nothing more. They won't do unpaid overtime, won't work on weekends, and won't answer emails on vacation. They won't do more than what they have been hired to do. Or they'll only come up with only ten items on an annual list that used to contain 26, 38, or even 45 items.
But the managers and business owners who benefit from people working unpaid overtime and low wages have told us that quiet quitting means people don't want to work. They make it sound like people are lazy or greedy.
In essence, they've been gaslighting the workforce.
Except guess what LSSU said about the word "gaslighting."