Can't We All Just Get Along About Hot Dogs?

on May 13, 2022
People will fight and argue about anything. Politics, the pandemic, Coke vs. Pepsi, the color of oranges. They will rant about their viewpoints, cursing anyone who disagrees with them.
But of all the things people get angry about, nothing, and I mean nothing, brings out the bitterest vitriol like food.
There are certain ways food should be prepared, where the best food can be found, and what ingredients should be added or avoided.
I confess I like to add to the mealtime mayhem by posting questions on Facebook like, "Is a hot dog a sandwich?" "Should you put mayonnaise on a hamburger?" and my favorite, "Cake or pie?"
(For the record, the correct answers are yes, yes, and pie.)
Already, I can hear many of you sharpening your pitchforks and warming up your torches about any of those answers, even though you couldn't be more wrong. People get downright riled up about the "right" way to do food, and they're convinced that their way is the only way.
But it's not. Mine is.
A recent article on TheTakeout.com discussed "10 Foods That Cause Arguments Every Time They're Mentioned." A few foods seemed like non-issues, but people have almost come to blows over a few others.
I've been embroiled in a few — ahem — vigorous discussions about the right ways to have certain foods, such as the best toppings on hot dogs, things that go on pizza, and the best place to get barbecue.
(Anything. Anything but pineapple. Anywhere, I'm not picky.)
Some of the minor arguments? There's a brouhaha between fans of regular Old Fashioned cocktails (bourbon and water) versus the people of Wisconsin who like brandy Old Fashioneds, made with brandy and Sprite.
Apparently, people in Illinois roast their northern neighbors over their brandy Old Fashioneds.
Not the Cubs-Brewers rivalry. Not the Bears-Packers rivalry. Not bratwursts versus knockwursts.
No, it's bourbon versus brandy, water versus Sprite. This — THIS! — is the thing that's tearing the two states apart.
Allegedly.
To be honest, I've never heard of a brandy Old Fashioned until now. I never cared about a regular Old Fashioned either. I think this is less of a clash of the Midwest and more just some Chicago guy who got tired of yelling at the jukebox and got angry with a bottle of brandy instead.
One of the real food fights is what kind of ingredients one should put on a hot dog. 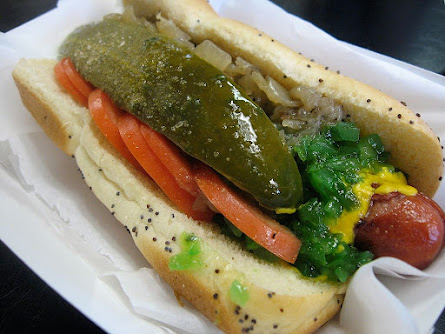 Whether it's Chicago dogs, New York red hots, chili dogs, or Southern-style slaw dogs, I'll eat it. Hell, I'll eat one of each if my wife's not around.
(Note to my wife: I'm kidding. I'm only eating two of them.)
(Note to the server: Where do you think you're going? Bring those other two back here.)
There's some serious beef between New York and Chicago, and I'm not just talking about Vienna versus Nathan's. The war between New York and Chicago hot dog lovers makes the East Coast-West Coast rap battles look like playground arguments over the last kickball.
At the very heart of the argument is whether you should put ketchup on a hot dog or not.
For a New York dog, there is only ketchup. You don't put anything else on it, just ketchup. No fancy vegetables, no mustard, nothing. Zip. Zilch. Nichts. Nada.
Oh, sure, there are those New Yorkers who will slather their dogs with onion relish, sauerkraut, and brown mustard. But there are also people who commit murder for pleasure or put pineapple on pizza. The sauerkraut putter-onners are viewed with suspicion by the ketchu-purists and reported to the House Un-American Activities Committee.
Meanwhile, 800 miles away, the Chicago dog has diced onions, neon green relish, tomato slices, a pickle spear, sport peppers, mustard, and celery salt, all on a poppy seed bun.
And no ketchup. That's blasphemy.
I can accept that the New York dog is just ketchup on a Nathan's frankfurter. That's fine, there's no shame in that.
Or if you put the sauerkraut and onions on there, that's your business. I'm not one to criticize a person's peccadillos.
I just don't think there needs to be a battle about this — some people like one thing, some people like another. You don't have to convince the other person that they're wrong and you're right.
Why do you look at the speck of relish in your brother's eye and pay no attention to the pickled cabbage in your own eye?
When it comes to the food wars, very few food battles get people's buns in a bunch, but I actually have no dog in the fight. I think we should all get along and that any hot dog is a good hot dog.
#AllDogsMatter, as it were. We all just need to get along and remember that we are brothers and sisters in the bun. Food should unite us, not divide us. So whether you're a Chicago dogger through-and-through, or a New York Red Hot, we need to unite for our love of one of the greatest food items in American history.
All I need is an ice-cold Coke to wash it down.
No, Pepsi is not alright. What the hell is wrong with you?